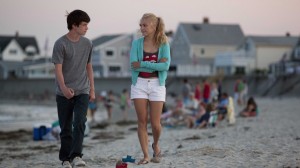 Summer in a middle-class Massachusetts beach town: families tangle, neighbors gather, children grow. There’s a distinct feeling of the 1970s in screenwriting team Nat Faxon and Jim Rash’s directorial debut, coming after their Oscar for Adapted Screenplay for “The Descendants.” Although set in the present day (likely for budgetary reasons) the concerns of its characters feel like memories of the team’s respective childhoods (which they admit is the case).  What most makes “The Way, Way Back” a curiosity, and so much better than its bits and pieces might merit, is that it’s a coming-of-age-in-summer comedy that does not redeem its worst character. The film does not pity him, does not find more than the least glimmer of humanity in a terrible, controlling, deeply unpleasant, suited-for-justifiable-homicide boyfriend figure. Steve Carell plays his car salesman character, Trent, faultlessly, while tanned an unnatural, unflattering liver-brown color with a haircut that looks like a seven-dollar-trim on half-price day. He makes a splendid, believable, hate-able shit. This unwavering portrait nearly murders the movie: you’re less concerned, at first, about how and when recessive, at-a-loss-at-life fourteen-year-old Duncan (Liam James) will get his first kiss, or demonstrate skills that will someday Make Him A Man, than how you got stuck in a darkened movie theater with such a detestable piece of shit. He’s far from tragic, merely small and curdled. Or you wonder how Toni Collette’s kind mom of three kids, Pam, puts up with this ever-cheating, lying, belittling, inhumane jerk. Can she be that kind? Can she be that much of a doormat? (Colette, as you would imagine, finds the expressions that convey Pam’s plight.) But once Duncan escapes the confines of Trent’s shack, and the embrace of the brood of the happy-drunk neighbor next door, Betty (Allison Janney, in fantastic, unrestrained form, a mile-a-half-minute with no filter in sight), he blooms. He escapes to the Water Wizz Water Park, and clandestinely takes a job, working with a different kind of grown man, Owen (Sam Rockwell at his most Sam-Rockwellian) who jokes and japes, seems immature and irresponsible in his own way, but eventually has the lessons that Duncan will need. But there are needles at the park, too. A bit’s repeated that involves male park employees tricking young girls into waiting as they ogle them, shown in uncomfortably-comfortable medium close-ups of bikinied asses, making us low voyeurs, too. As one of Betty’s daughters, Susanna, AnnaSophia Robb provides effortless charm. She convinces as one of the people who draws Duncan from his world of squirm into slightly less uncomfortable teenage years. The inevitable first kiss is dispatched with a marvelous bit of blocking and a superb line of dialogue: these are the glittering bits of behavior that last. Once the movie’s over (or in my case, after two or three days passed) the meanness resonates, subsumed by the good things, the hopeful moments. And once again, filmmakers find currency and punch in an ending shared by “The Graduate,” “Choose Me” and “Say Anything…,” among others: the future’s uncertain, but it’s going to remain an interesting ride for the two characters left in the frame. The widescreen cinematography by John Bailey (“Silverado,” “Mishima,” “Sisterhood of the Traveling Pants”) finds Kodachrome luminosity in the most potentially banal of moments. With Maya Rudolph, Rob Corddry, Amanda Peet. 96m. (Ray Pride)

“The Way, Way Back” is now playing at Landmark Century and will expand in coming weeks.