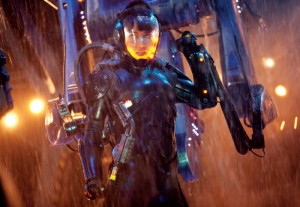 Vivid pulp rumpus, Guillermo Del Toro’s monsters-vs.-robots (or “Kaiju” versus “Jaeger”) epic “Pacific Rim” is brimming, bursting, surging and punching with energy. It’s an amalgam of dozens of things I recognize, and surely hundreds more I don’t (drawn, in large part, from Del Toro’s own vast knowledge of both monsters and mecha, and robots and multiple cultures). Dialogue is pro forma without becoming rigid, largely because of the cast, including the one man who thinks he can save the planet from the monsters bursting from within, from beneath the sea, from an otherworldly vaginal canal, Stacker Pentecost (Idris Elba): “Today, at the edge of our hope, at the end of our time, we’ve chosen to believe in each other… Today, the apocalypse has been cancelled!” (Shakespearean verve is indicated.) Character names thicken with unseemly delight. They’re masterful moniker mastication, on par with David Cronenberg’s strange-named strangers: brother Raleigh Becket and Yancy Becket. Father and son Hercules Hansen and Chuck Hansen. The Wei Tang triplets and the Kaidanovsky siblings. Mako Mori. Stacker. Pentecost. No, we’re in sweet Don DeLillo territory here, with a touch of vaudeville in the form of Ron Perlman’s sharkskin shark of a pirate, Hannibal Chau (“Named after my favorite warrior and my favorite Chinese restaurant in Queens”). When talking about the fine, weathered, tangible textures of “Never Let Me Go,” filmmaker Mark Romanek employed the Japanese term “wabi-sabi” to describe its look, which “Pacific Rim” shares on an industrial scale. “Wabi-sabi is just sort of when things have a patina of wear and the passage of time is evident,” Romanek said. “It’s a cracked cup instead of an uncracked cup.” Del Toro does this with his comics-panel bold compositions and lived-in, lived-on settings: Paint peels. Rust always seeps. Rot beckons. Walls of water crash the walls of men. And the set of determined faces is matched by marvelous costume design that brings it all to human, textural level. Fabrics feel weathered, worn, timeless, classic, wonders of sensation. The slightest tweaking of a seam along the shoulder of a young man’s sweater; the wool-to-linen burst along the hard, pressed crease of Stacker Pentecost’s blue gabardine-ish suit jackets; shoes. Shoes that suit the scenes. Shoes that suit the characters. Little red shoes that make the past explode into the shared memories of two Jaeger pilots. There’s so much onscreen, so much suggested but not explored or explained, almost like jam-packed Harvey Kurtzman panels from classic MAD magazines, detailed by the likes of a Romanek or Tarsem. It’s joyous even as cities are leveled by the pure malevolence of the Kaiju. It would take a few thousand words just to unravel the plot in synopsis and a few thousand more to weight the instants of sometimes-visionary loveliness on screen. I eagerly await the illustrated book that divulges the myriad influences del Toro has melted down into “Pacific Rim” (arriving two days after this review, argh). Composer Ramin Djawadi’s score has forgettable passages, but the most stirring moments, including the film’s major themes, incorporate twangy electric guitar (played by Tom Morello of Rage Against the Machine), as well as Japanese drums, a Russian choir and the Chinese erhu violin. And how do you stem this particular apocalypse? I’ll only say that the sea is endless, boundless, isolating, gathering, nurturing, embracing, and atop it, we’re graced with the summer season’s second-best first kiss. With Rinko Kikuchi and a lot of really blond guys, some with stubble, plus two mad scientists who may have come directly from pre-production meetings for “Hellboy 3.” 131m. Reviewed in IMAX 3D. (Ray Pride)