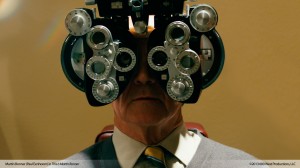 Chad Hartigan’s festival favorite, “This is Martin Bonner” won an Audience Award at Sundance 2013, and its virtues and limitations are very much part of what amounts to an American indie film genre: the life-bump. Two taciturn men of different ages reach a crossroads in each of their lives; their meeting and what unfolds helps them in their self-discovery. Sounding therapeutic in outline, “Martin Bonner”’s near-static form and overpowering reserve instead provides sparks and slivers of behavior and character that accumulate simple grace. Hartigan’s style is akin to the offhand accretion of backstory and motive in a couple of films by Aaron Katz, which becomes more notable when cinematographer Sean McElwee also shot Katz’s provocative “Dance Party, USA” (2006). The characters bear their broodiness, but Hartigan finds just the right elements in their banal passage to lift them above their sorrows. With Paul Eenhoorn, Richmond Arquette, Sam Buchanan, Robert Longstreet, Demetrius Grosse. 83m. (Ray Pride)

“This is Martin Bonner” opens Friday at Facets.