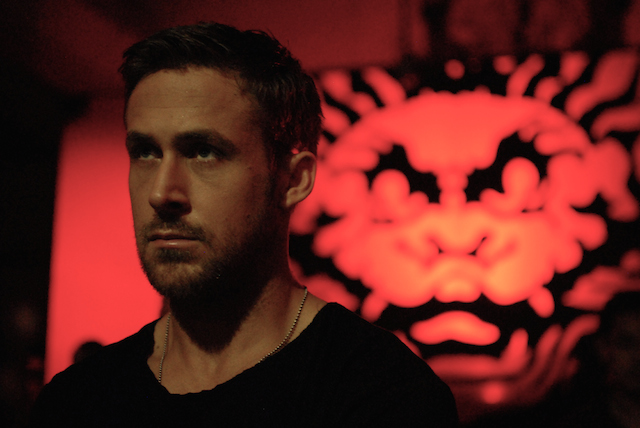 The very title, “Only God Forgives,” not only suggests austere pulp, high Euro-trash, it encapsulates the red-light-green-light binary character of Nicolas Winding Refn’s simple, cruel fairytale that’s erected to sustain his gleeful visual and sonic delirium: the characters that take vengeance are taking up the mantle of a higher power, and will be smote. (As well as cleft in twain.) No eye for any old eye here.

In a storybook Bangkok, where the central characters live by night and a nameless, karaoke-adept cop-cum-executioner (Vithaya Pansringarm) meditates by day, an American sex tourist kills a woman, whose father-pimp then is given leave to do what he wants with the man under the gimlet eyes of the cop. The victim’s brother, Julian (Ryan Gosling), running a boxing gym, but likely other criminal endeavors, and on the run from an at-first unspecified crime, notifies their mother (Kristen Scott Thomas), who comes to collect the body. Action piles upon reaction in a virulent way until a gorily climactic punishment of a secondary character after the fashion of primal Greek drama, overseen by a reproduction of a statue of David from antiquity, tiny penis and all.

“Love it or hate it, you’re never going to forget it,” the Danish writer-director has uttered variations of since its bruising reception at Cannes 2013, “That’s a personal satisfaction.” Refn’s best films and worst films (“Fear X,” “Valhalla Rising”) share one key feature, which he identifies as “fetish.” He wants to show what he wants to see. It’s Nic-porn, begun for an audience of one. Red-slaked corridors that push toward darkest blacks in one-point perspective contain more violence than the guns and broadswords his characters wield. Rows of Chinese lanterns that push to the farthest reaches of the frame are one recurring design element, as well as a wallpaper pattern, seen in closer shots, of a coiled dragon about to strike, but from distance, looks like a succession of ineffectual penises dragged down by outsize balls.

Even as their shadows fall across these walls, the characters are not supermen; they’re humans reduced to chiaroscuro. Characterization is even more minimal: Julian speaks only a fistful of phrases, his features impassive without growing tense; the cop circles his victims with a thousand-yard stare like a man who has never known mercy or offered it; Kristin Scott Thomas… Ah, KST. Refn has identified her mama Machiavelli as a mingling of Lady Macbeth and Donatella Versace, and that’s just getting started. Kristin Scott Thomas, rippling with hostility, is a force of un-nature, savoring gobbets of unlikely obscenity, a caricature of bleakest misanthropy. (When a young woman identifies herself as an “entertainer,” she snaps, “How many cocks can you entertain in that little cum-dumpster?”) The role is less woman-hating than mother-loathing. (Julian’s symbolic return to the womb, to put it gently, apes the key gesture of David Cronenberg’s “Videodrome.”)

The keenest characterization comes when Crystal (a name I found only in the press notes) arrives at her luxury hotel and looks out across the haze of Bangkok and looks over the balcony, cocking her hip a certain way, and Refn cuts to Julian, in another location, in jeans and white t-shirt, his hip already cocked in selfsame manner. It’s the most Refn demands of him: stand still, now stand more still, be décor. An obvious touchstone is Jean-Pierre Melville’s 1967 “Le samouraï,” a genre gangster film that was also, elegantly, an illustration of the chambers of a schizophrenic mind. Handsome Alain Delon wore a trench coat in as louche a way as Gosling dons a t-shirt. In each role, the actors work from restive repose, too inward even to bristle at the harshest of insult.

Cinematographer Larry Smith, who shot Refn’s 2003 Lynchian misfire, “Fear X,” “Bronson” and Stanley Kubrick’s “Eyes Wide Shut,” pushes the red in both light and dark settings for this supposedly colorblind director. Where there’s blood, there’s crimson. (Many of the interior spaces of this largely interior film could be variations on Jef Costello’s shabby room in Melville’s masterpiece.) The poker-faced violence of Takeshi Kitano’s gangster films is another touchstone, as well as the music-and-sound textures of David Lynch’s movies. Cliff Martinez’s score consists of many variations of the yawn of an abyss, along with unsubtitled karaoke in Thai (just like the film’s credits). Something else Refn would likely know in writing the role of the cop who thinks he’s God and casting Pansringarm: like his fellow Eastern director Hou Hsiao-hsien, Kitano is very, very fond of karaoke.

Still, this intellectual prankster with a taste for trash has yet to retreat into didactic schema like his countryman Lars Von Trier, for whom his father, Anders Refn, edited “Breaking the Waves” and “Antichrist.” There’s intellectual strain in all of Refn’s films, and more so in his richly embroidered and slightly superior interviews. But most importantly, “Only God Forgives” draws on a truism Refn’s father has repeated, “get in late, get out early”: there’s hardly a shred of story left on these bones, just archetype and gesture. It’s more mystification than mystery, for worse and for better.

The greatest impression left by “Only God Forgives,” aside from the unapologetic bile, and hostile pacing that is sometimes narcotic, is of high craft wielded in the service of sullen art-house trappings, an accomplishment less of visual beauty on a minimal budget than maximal insult to any audience seduced by the gleaming, gliding brood of “Drive.”

In the final shot, in one of the film’s ornate karaoke settings, the cop’s face makes the slightest motion, a just-discernible movement of an eyebrow that is like the moving of a mountain. An exquisite gesture at the end of 89 self-seriously strenuous minutes, it’s like the tiniest of pearls finally expelled by the oyster after a duration of haphazard grit.

“Only God Forgives” opens Friday at the Music Box.