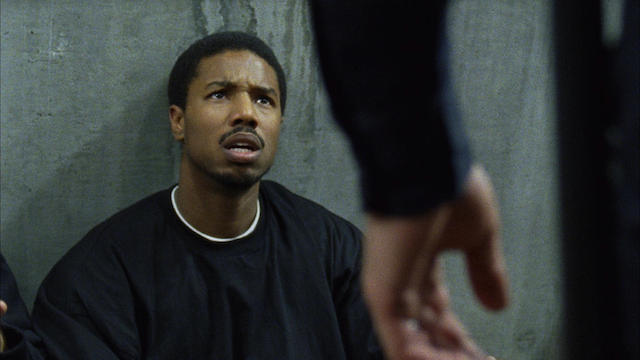 On the same day “Fruitvale Station” opened in Chicago and seventeen other cities, President Obama made an impromptu statement about the verdict in the trial of George Zimmerman in the shooting of a seventeen-year-old: “When Trayvon Martin was first shot, I said this could’ve been my son. Another way of saying that is, Trayvon Martin could have been me thirty-five years ago.” Of his movie about the death by police shooting of twenty-two-year-old Oscar Julius Grant III, debut writer-director Ryan Coogler said several months ago that he was inspired because of the event and its aftermath. “I heard that someone had been shot at the BART station, and that he passed away the next morning. On New Year’s Day I saw the footage, and I was deeply affected by it. Looking at the footage, I realized that Oscar could have been me. We were the same age, his friends looked like my friends.” Between those two statements lies the power of Coogler’s slim pamphlet: a day in the life of a young man simply trying to keep each of the components and compartments of his life from collapsing in on each other. Largely handheld and composed documentary-style on actual locations, including the BART Fruitvale Station platform, the film is almost as simple as a news bulletin. (The film opens with actual phone-camera footage of Grant’s killing.) But not quite: there is one scene that some early reviewers have contested for its bluntness. While pumping gas, Oscar sees a stray dog on the apron of the station and plays with it. After he turns away, we hear the sound of it being hit by a car, and Oscar yells after the hit-and-run driver. He holds the bloodied dog in his arms. Sudden, shocking, senseless: no one hears Oscar’s cries for help. He returns to his car, the moment held in a wide long shot. Was that rank symbolism? What happens next is the true punch: behind the station, we see now there are elevated tracks, as we hear the harsh whisper-rush of a BART train entering, then exiting the frame. That’s where I just stopped breathing for a moment: potentially blunt dramaturgy turns to something profound (and not perfumed) in implication. The fatedness is not limited to the train, to another train that will take he and his friends and his girlfriend to Fruitvale Station in a few hours, it’s everywhere. Every corner. Every cop. Every mistaken intention “Fruitvale Station” holds the tension of its real-life events, but also an uncommon attention to the potential for catastrophe in a figure’s each and every single step.  A New Year’s Eve countdown on a crowded train? A shot of train leaving an underground tunnel, faces and figures within awash and illuminated as a shimmering blur? The shot then held a moment as the train joins the darkness further along. Hold. Hold. Three-four seconds of screen time, of absence, resounds. The consistently ragged camerawork reaches its apotheosis in the shooting scene, where the actions on the platform are depicted in a way that blurs comprehension: the heat of the moment is conveyed by not dramatizing the actions cleanly or clearly. What happened? What happened? The fine cast includes Michael B. Jordan, eloquent even in contemplative silence, such as behind the wheel of his car; Melonie Diaz, alert in each second on screen, as his girlfriend and mother of his daughter; and Octavia Spencer as his mother. 87m. (Ray Pride)

“Fruitvale Station” is now playing at River East and Landmark Century and goes wide July 26. A trailer is below.