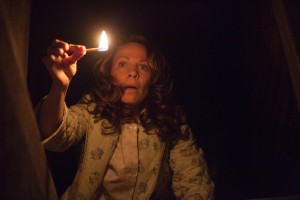 An old-fashioned scare show turned out with serene confidence, James Wan’s efficient based-on-true-superstition “The Conjuring” is prelude to the events dramatized in “The Amityville Horror.” Married paranormal investigators, or demonologists, Ed and Lorraine Warren (Patrick Wilson, Vera Farmiga) are called upon to investigate a “dark presence” in a remote Rhode Island house where a couple (Ron Livingston, Lili Taylor) and their five daughters recently moved. It’s the 1970s, or at least Wilson’s sideburns are. Once the investigation begins, the events come fast and furious with near-cyclonic force, some chilling, others increasingly goofy (but never as goofy as the stranger complications in Wan’s “Insidious”). Most of the inhuman occurrences appear to be conveyed through physical means on a human scale, along with the requisite bumps, thumps, jumps, whispers and shrieks in the night. “The Conjuring”’s best special effect is very good actors indicating simple things, especially Farmiga, all but visibly vibrating with distress at moments that Lorraine senses shards of the unfinished past. Wilson is appealing stodgy at her side, as is Livingston alongside the brimming kindness and bristling concern in Taylor’s performance. My favorite passage is an extended traveling Steadicam shot that introduces the farmhouse setting, scored to the Zombies’ “Time Of The Season,” which moves from the driveway, alongside and past the brood bringing in belongings, and into the rooms of the house itself. The shot’s as giddy as a pup, moving far faster than it should, but by its end, it’s done its job. It’s not restless ghosts that have infested the house through that moment; it’s us, our point-of-view, looking eagerly in the bright light of day toward the dark patches of night. With Joey King (the keen heroine of “White House Down”), Shanley Caswell (“Detention”), Hayley McFarland, Mackenzie Foy and Kyla Deaver as the timorous sisters, as well as Sterling Jerins, Marion Guyot, Steve Coulter, Shannon Kook, John Brotherton. 112m. (Ray Pride)

“The Conjuring” is now playing.