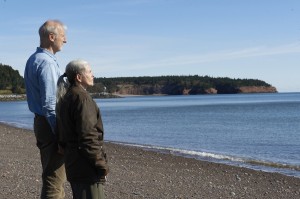 For the growing elderly British moviegoing demographic, Vanessa Redgrave coined the phrase, “the grey pound,” and an Australian exhibitor a few years ago expressed approval, if memory serves, of the “blue rinse dollar.” “Still Mine,” an eminently honorable Canadian exemplar of narrative calm and understated crowd-pleasing, ought to open more than a few closely held American change purses. Based on a true story about eighty-seven-year-old New Brunswick man Craig Morrison challenged by the local bureaucracy—the Royal District Planning Commission—about the condition of a new home he’s building for Irene, his Alzheimer’s-stricken wife (Genevieve Bujold, gray yet hardly faded). Another challenge comes when his rich, ripe strawberries can no longer be sold on the market: he doesn’t have a refrigerated truck, new rules, new rules you know. “Got-dam global warming” is even on their minds. Cromwell, seventy-three, towers over Bujold, seventy-one, yet they play like the long-lasting team they’re meant to be: these Morrisons have had the life, but they don’t intend to let anyone, including their seven children, take their life on their 1,000-acre bayside cattle and strawberry ranch away from them. (Cromwell’s not Canadian, but based on this role, you might guess he was generations to the country.) There’s a brisk, frisky sex scene—“It never gets old, does it?”—that wonderfully echoes another such tender provocation, from Robert Altman’s 1977 “3 Women,” in which Cromwell’s father, the director John Cromwell, then in his nineties, played part of an elderly couple, with Ruth Nelson, whose sex scene in that strange film offered one of its most tender moments. The existence of Sarah Polley’s similarly themed, superior “Away From Her” takes nothing away from “Still Mine.” Writer-director Michael McGowan is an assured hand: the scenery is there to add oxygen to each and every scene, and the patience and grace of Cromwell and Bujold is a lovely thing. (Bujold delivers the line, “I’m just worried our luck’s beginning to run out,” with so many levels of love and concern.) The ending is triumphant, understated and oh so sturdy. A home, a haircut. Moments. Just moments. It suits Cromwell’s intonation-exhalation of the line, “That’s the thing about pine, it holds lots of memories.” With Rick Roberts, Julie Stewart, Campbell Scott, Jonathan Potts, George R. Robertson, Ronan Rees, Zachary Bennett. 103m. (Ray Pride)

“Still Mine” opens Friday at Landmark Century and Renaissance.