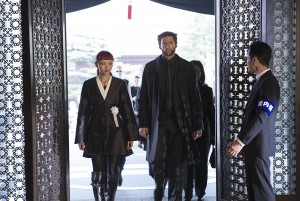 “The Wolverine” succeeds as a movie because it’s not a “superhero” movie. Its central character, inhabited by the mutton-chops and imperturbably bulked torso and a growl deep in the belly of Hugh Jackman, is Logan, a man, all right, a mutant, who gets into the family succession intrigue of a Japanese megacorporation. (Logan is an impregnable bulwark of post-human.) As we see in the opening scene, invoking historical horrors in fine Marvel tradition, Logan saves the life of a solider as the H-bomb is dropped on Nagasaki. That man (Hiroyuki Sanada) transforms himself into the head of Yashida industries, the apocryphal name of which is displayed on-screen almost as often as Audi luxury vehicles crested with their joined-ring logo. Years later, he summons the disillusioned Logan for a final goodbye, not warning him of his true goal or about the Samurai and Yakuza conflicts that will erupt, or that he would discover how much of a lone-wolf Ronin he had become in his isolation. There’s a sweet simmer to James Mangold’s visual choices, with compositions often having an extra pop that resembles a comic-book frame, but also drawing from film predecessors both Japanese and American. (In the August American Cinematographer, director of photography Ross Emery ticks off a list that includes Clint Eastwood’s “The Outlaw Josey Wales,” William Friedkin’s “The French Connection” and Hiroshi Inagaki’s Samurai trilogy (1954-56), “Musashi Miyamoto,” “Duel at Ichijoji Temple” and “Duel at Ganryu Island.” In March, Mangold (@mang0ld) tweeted images from ten films, adding Wong Kar-wai’s “Chungking Express” and “Happy Together,” Ozu’s “Floating Weeds,” Powell-Pressburger’s “Black Narcissus” and Takashi Miike’s “13 Assassins” as well as “Chinatown” and “Shane.” And let’s throw in a little “Speed Racer” just for fun. How Mangold, the veteran director, son of painters and student of the great Alexander Mackendrick honors that roster is how you can see the bits and bobs in retrospect, but in the watching, at least until a gonzo-gaga battle royale at the end, you’re viewing a movie rather than ticking off influence, homage or outright theft. He honors his predecessors. The directorial skills Mangold applied to “Heavy,” “3:10 to Yuma” and “Walk The Line” are in evidence, especially in an understanding of the Western’s dynamics of quietude, then release. “The Wolverine” wears its influences as lightly as a movie with a blade-to-blade duel to the death atop a speeding-bullet-train can. The story is drawn from a well-regarded 1980 four-issue standalone series by Frank Miller of the forty-years-running Wolverine comic. Two young women become his partners: the more traditionally pretty is Mariko Mori (Tao Okamoto), a stick-skinny heiress with a collarbone that could kill; as Yukio, the manga-escaped pinwheel pixie warrior-bodyguard with cotton-candy-colored hair and precision bangs, Rila Fukushima is a human special effect.  Like with “Pacific Rim” in the first weeks of its release, will “The Wolverine”’s eye-pleasing exotica, incongruent tone and a pulp plot that’s still crafted a few steps above the usual binary balderdash, repulse a parochial American audience? Maybe, but the film’s strengths cannot but be rewarded by Yen and other currencies in the ever-growing foreign market for megadecamillion-dollar-budgeted studio productions. With, briefly, Famke Janssen and a couple other Marvel critters, as well as Hiroyuki Sanada, Svetlana Khodchenkova, Brian Tee, Haruhiko Yamanouchi, Will Yun Lee. 126m. (Ray Pride)