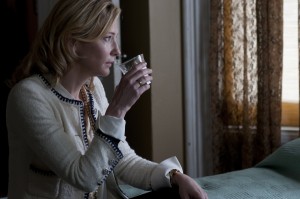 Woody Allen’s bleak, seriocomic mash-up of “A Streetcar Named Desire” and an imagined life of Mrs. Bernie Madoff after her husband’s vast Ponzi empire collapsed, is filled with odd turns, tone-deaf comedy about class, but most importantly, a no-holds-barred performance by Cate Blanchett as a woman of privilege who can no longer hold onto anything, particularly her mind. Crashing into madness, she’s a monster, hungry for her own soul. Blanchett recently played Blanche Dubois, that began with her theater company in Sydney, Australia and moved to the Brooklyn Academy of Music, and even without the plot and symbolic parallels to Tennessee Williams’ vital invention, it’s unlikely she could help but channel that experience into Jasmine and elevate what was placed on the page. Regal and superior, deluded and wandering, Jasmine is also lost, lost, lost. Stoli or Xanax are seldom far from hand. An adoptee, she’s come from New York to recover for a while with her also-adopted sister, Ginger (Sally Hawkins). Hawkins is petite, visibly shouldering oversized weariness that goes away when she finds the right-wrong man. (A brief scene between her and suitor Louis C.K. is the film’s best: tonally, emotionally, comedically, it’s a fine piece of fabric.) Jasmine’s discomfort discomfits. In Allen’s stage set of San Francisco, the side characters clatter away in her smothering wake. Whenever you want to look away, Blanchett takes her to another seriously troubling place. She makes unlikely excuses, offers clueless explanations, and is only in full-dress rehearsal for the final breakdown to whisk her away. (Allen’s one dramatic coup is providing a fine Greek rationale to the true source of her fate.) The kindly, active but unforgiving camera of Javier Aguirresarobe (“Vicky Cristina Barcelona,” “Talk To Her,” “The Road”) will be there. Santo Loquasto’s production design bursts with touches, from the splendid, bursting penny-thrift colors of Ginger’s San Francisco apartment to the chilled, dead colors of Jasmine’s New York apartment, slathered in deep boardroom-green paint, the color of money that’s died and crushed its possessor. The comedy and the drama rest uneasily, suggesting, as in much of the sheltered seventy-seven-year-old director’s late work, that he’s always going to be two or three screenplay drafts shy of any possibility of nearing goodness, let alone greatness. Yet, still. Jasmine is a cautionary virago for anyone who’s ever witnessed a friend unknowingly muttering to themselves just within earshot, just within the frame of reality. Jasmine’s headlong fall is fearsome, lugubrious, and ultimately, exasperating. I’ll take my lunch elsewhere, thank you. You can have all the park benches to murmur your miasmas about Park Avenue to the open air, ma’am. As her creep crook husband, Alec Baldwin carries an air of perpetual distractedness; Peter Sarsgaard is honey and curly locks as a soon-disappointed politico would-be romantic supplicant; and Michael Stuhlbarg (“A Serious Man”), as a smitten dentist who hires her as a receptionist is a precise hit of physical embarrassment. As Ginger’s most ardent boyfriend, Bobby Cannavale lilts with both physical and vocal character, but Allen’s only offered him caricature. Andrew Dice Clay as Ginger’s ex-husband? A sublime, hurt bear. With Tammy Blanchard, Max Casella, Alden Ehrenreich. 98m. (Ray Pride)

“Blue Jasmine” opens Friday at River East, Landmark Century, CineArts Evanston and Landmark Renaissance. A clip of the scene between Sally Hawkins and Louis C.K. is below.