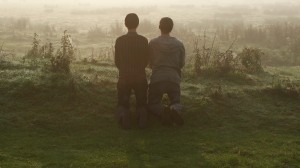 (Hors Satan)  There’s madness under the low clouds of rural France. A painter tends his fallen flock: Bruno Dumont. The French director’s six features released in the U.S. to date are a gorgeous clutch of terrors: “La vie de Jésus” (1997); “Humanité” (1999); “Twentynine Palms” (2003); “Flanders” (2006); “Hadewijch” (2009), and now “Outside Satan” (2011). In marshy countryside by a channel, a loner with haunted eyes and primal body language (David Dewaele) wanders through the damp and mist, cruel but also capable of acts of healing. A beautiful young farm girl (Alexandre Lematre) feeds and protects him. Prayers are invoked. The devil may be afoot. Harsh, cathartic sexual acts are enacted as ritual.  Violence, beauty, retribution, disappearance:  Dumont’s final feature with the late Dewaele is as hypnotic as their collaboration in “Hadewijch,” another lucid hallucination splendid with sex, demons and landscapes that could have been painted centuries ago. Dumont delivers potent shocks, and is willing to physicalize notions about evil and good, but the most potent aspect of all his work remains his attention to faces and to light. The sound is eccentric as well, recorded directly and in mono, with no post-synchronization changes after shooting. “We sometimes even hear sometimes the tracking rails or the lens focusing. The sound field is very rich,” Dumont said (roughly) in the French press kit, “not at all domesticated. So when there’s silence? You feel good, and strong.” 115m. Shown in 35mm CinemaScope widescreen. (Ray Pride)

“Outside Satan” opens Friday at Siskel. The clip below is a gorgeous sampling of how “Hors Satan” looks and sounds and moves.