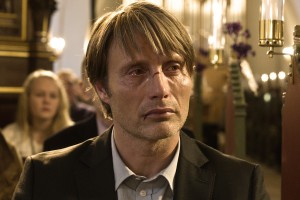 After a range of flawed films, Danish director Thomas Vinterberg returns to the heights of his talents with “The Hunt,” a genuinely shocking drama of a modern-day witch hunt. Lucas, a kindergarten teacher (fierce, focused Mads Mikkelsen), is falsely accused of pedophilia by a five-year-old girl who also happens to be his best friend’s daughter. Straightforward but hardly simplistic, Vinterberg honors his own history with stories about the torrid secrets of families (and the crime of sexual abuse), but also the theme that Hitchcock loved so much, he named a movie “The Wrong Man.” This one’s a true twenty-first-century horror movie. Vinterberg offers a more modern, more contemporary paranoia than Hitchcock and Fritz Lang brought to the screen: there is nothing to fear but the fear of others, projected onto yourself. The stench of accusation clings even if there is proof that one was blameless. Guilty until proven innocent: the allegation trumps all, especially when the testimony comes from the mouth of a child. “Invented memories” recounted by a little girl can be more dangerous than authentic ones. (As his diminutive accuser, Annika Wedderkopp also delivers a magnetic, yet vulnerable performance.)  Lucas’ life seems to be improving, even after he’s lost one teaching position and takes up the kindergarten job in the rural Danish village where he grew up, where everyone knows each others’ secrets, deer-hunting rituals mark the seasons, and drinking is in everyone’s shared history. But autumn will soon turn wintry in every possible way: how will the citizenry react once the accusations against Lucas spread like wildfire across the hillside? As with the baroque family drama of “The Celebration,” Vinterberg excels at group dynamics (and massed hysteria), but also at the construction of story, parceling out sympathy and turns of plot with masterful craft. (He shares script credit with Tobias Lindholm, writer-director of the excellent “A Hijacking.”) Could things go as badly as in Sam Peckinpah’s small-town suspense film, “Straw Dogs”? Or can truth prevail? Every scene counts: a compelling movie, “The Hunt” is a rare master class in psychological tension. Cinematographer Charlotte Bruus Christensen’s lighting is slightly misty, often shooting toward light sources, a halation effect that quietly captures impermanence, the events playing like a memory that remains unfixed. 115m. (Ray Pride)

“The Hunt” opens Friday at the Music Box. The American trailer is below.