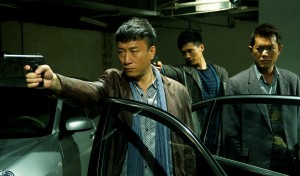 The best Johnnie To films—and there are many—are like church: there may be no more than a few followers of his impeccable high classicism, but they know much of the doctrine that is his sleek, shockingly efficient style as present leader of the twenty-first-century Hong Kong gangster genre. “Drug War,” at least his fifty-third feature as director, is thrilling, hyper-efficient, choreographed action filmmaking at its finest, but it also, like other drug-driven narratives—“French Connection,” “The Wire”—has a political undercurrent that deepens the telling but never insists on raising an unnecessary placard of expository dialogue. (The pair of gifted warrior drug workers who happen to be mutes offer a ready reading?)  It’s a flawed world, in motion, observed without imperfection. The prolific fifty-eight-year-old producer-director-writer uses so many potentially overused or superfluous techniques available to the action filmmaking, including cranes, dollies, varying focal lengths, booming down while tracking, overhead shots, surveillance camera footage, and yet it comes down to economy and grace: where do you put the camera? There’s one place and one place only for the best filmmakers, and when it’s practiced along with the kind of felicitous editing that To seems to breathe, it’s spectacular. Movies like the most recent “Die Hard” production, to pick on a single hapless example, hardly qualify as filmmaking at all: the thudding feeling you get from cut to cut stops after a while and numbness sets in. Not so with “Drug War”: it’s a joy to see such assured, efficient professionalism in latter-day filmmaking, such dynamic alacrity in each and every element of the visual storytelling. And of course, the story, co-written with his customary collaborator, Wai Ka-Fai, of a meth cartel deep inside China that may be brought down over the course of seventy-two hours in a sting run by a detective and a turncoat criminal is filled with turns and burns and ooh-and-ah-worthy details and policier-style legerdemain. A key setpiece, set in daylight in early morning in the middle of a yet-to-be-populated industrial nowhere, accompanied by sulfurous fog that rolls in to the crack of gunfire from dozens of officers and criminals, is a blunt vision of the farther reaches of modern-day China. It’s also a tableau of hell that grows, compounding in a way that even a visionary filmmaker like Elem Klimov might appreciate. What the hell: “Drug War” is a taut, minor masterpiece. It felt like watching early Walter Hill for the first time—“The Driver,” “Southern Comfort”—and that is a very good feeling indeed. The cast, led by Louis Koo, Honglei Sun and Yi Huang, are a joy to watch in motion, and especially, in strategic repose. And to To’s regular cinematographer Cheng Siu-keung: thanks for the time and space! 103m. Widescreen. DCP. (Ray Pride)

“Drug War” opens Friday at Siskel. The tasty U. S. trailer is below.