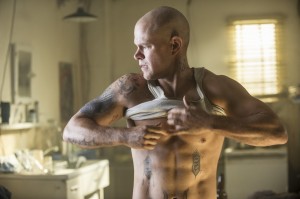 Situated at the end of the world at the end of the cinema in our usual center seat, “Elysium,” Neill Blomkamp’s 2154-set follow-up to “District 9,” has already set caverns of the internet alight. It’s not all that difficult to trip over a review with the assertion that “Elysium” has a key flaw: it has “politics.” As an allegory for the modern moment, this futuristic race against time is, yes, assuredly future now, in its own way a dystopian hero’s journey that could well have been adapted freely from Naomi Klein’s “The Shock Doctrine.” But like better science fiction, it’s an allegory that lines up parallels to the present moment, but doesn’t fuss so much over extended metaphor. For the middlest of brows (plot rather than theme and assured, thrilling physical detail): it’s a Matt Damon chase adventure. Max is a worker, injured on the job, fired, told he has five days to live after radiation contamination. Max turns into Jason Bourne, or more to Blomkamp’s esthetic, he’s transformed by criminals-turned-rebels from his reformed car-thieving past into a weaponized merc, a mega mecha with weaknesses, hours to live, grudges to bear.

The title comes from a gated community in the sky. Seen from the bustling, burning twenty-second century Los Angeles (actually shot in some of the worst slums of Mexico City), the space station, shaped like the “2001: A Space Odyssey” torus, is just visible in smoggy-misty sky like Mt. Olympus in distance or a starfish in the froth of surf at seaside. It winks, it mocks, the “citizens” left to scrabble in the dust, producing, among other things, the android police that violently keep the poor from reaching the stars. (In the titles that set up the film’s premise, the words “Earth’s wealthiest inhabitants” are pointedly superimposed over Saudi Arabia.)

While “Elysium”’s exuberantly optimistic endorsement of universal healthcare for all citizens may set retrograde teeth on edge, there’s a lot more that acknowledges fault in this civilization endeavor we’re all caught up in. Still, the dialogue hews efficiently to pulp: “Stop right there or I’ll blow my head off”; “Open the skies! We’re coming up,” and “I’m sending my own data wrangler.” But if you’re perceived as a protestor, the robot cops will Taser, wrist-tie and wreak carpal damage on you. “Illegals” is used as a high pejorative, for those who attempt to shoot shuttles to Elysium for its life-saving, body-transforming health care. On the ground, the corporations have drab syllable-clusters for names, those anodyne names like any average weapons manufacturer or keeper of mercenaries: Armadyne, Versamex, Sabre Cerebral Defense. And the Nazi-era verbiage of “Heimat” persists centuries on, emblazoned on attack helicopters throughout: “Homeland. Homeland Security.” A search for perpetrators from above with thermal-detection cameras, helicopter hovering just tens of feet above, evokes the “Collateral Murder” video at the center of the Bradley Manning prosecution. Blomkamp’s intelligence, too, is nearly radioactive.

Small details bristle in every frame, including a tattoo on Max’s forearm, which reads, “barco,” or boat, or ship. (Or shuttle to escape the planet to be healed in the sky.) The elites are marked by barely raised scarifications, on the forearm or below the eye, like a prison teardrop tattoo but far, far more valuable. Slogans are scattered in the 2174 Los Angeles, in graffiti and on walls, brand names to match the logos on each and every part of the “Robocop”-style SWAT police droids. (They’re slightly more advanced than the weaponry Homeland Security has provided to militarize small-town police departments in the past decade.) Among the poor, you can glimpse beat-down Adidas and weathered GMC trucks. The wealthy work with sleek translucent screens and advanced neural downloads, while the revolutionaries hack together a wild range of devices, many like now-antiquarian Panasonic Toughbooks, working from C: prompt and line code.

In the country club world in the sky, it’s like the second half of “Wall*E,” but lived in cocktail party hush and accessorized by Bulgari instead of Slurpee and Barcalounger. Jodie Foster speaks her fluent French and some kind of South African-inflected patois, but her humorless defense secretary Delacourt is a shadow, however unintended, of self-anointed savior of freedom Liz Cheney, daughter of the former self-recruited vice president, who is now herself a candidate for senator from Wyoming. The kind of hostile ice radiated by Cheney is in sliver form in Foster’s cold performance, someone who believes her freedom comes only from denying freedom to all others. (Cue a robot shattering in mid-air, cobalt fragments in an attractively deadly slow-motion dance of disintegration.) At its best, most inventive instants, Blomkamp is the filmmaker his mentor and colleague Peter Jackson might have become before he ascended into the cloud-Tolkienland. With brute merc Sharlto Copley, love interest Alice Braga, raffish, pigtailed pal Diego Luna and the always captivating William Fichtner, for whom sleaze is ease, and whose corporate chieftain here is as quietly decadent as a tugboat full of tapioca, painkillers and coca pura. 109m. (Ray Pride)