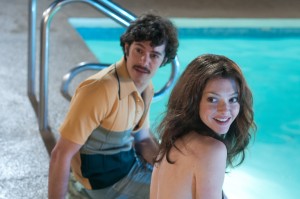 “Lovelace” is… I’m stumped. Where to begin, if not end? It’s now playing at a theater some distance from you, as well as on video-on-demand in the comfort of your own boudoir. It’s hard to scrimp much more enthusiasm to describe what’s on screen in this lukewarm, half-hearted, essentially dull biography of sorts from documentary-teethed directors Rob Epstein and Jeffrey Friedman (“Common Threads: Stories From the Quilt”; “The Celluloid Closet,” “Howl”). Amanda Seyfried is a game performer, and the Linda-like freckles sprayed across her cheeks, which all and sundry in the film comment on, are fetching. (“Amanda was a joy to work with,” Friedman is quoted in the press notes, “She is a wonder of spontaneity, comic timing, and fearless access to raw emotion.”) “I just don’t want to disappoint anyone, I guess,” is about as deep as the psychology gets. Others in the twenty-five-day wonder: Peter Sarsgaard plays her abusive husband, all mewly menace and familiar, level dank eyes; an unrecognizable Sharon Stone as her holier-than-high-and-mighty mother who grimly shoves Linda dutifully back into the arms of violence; Adam Brody is her grinning, galumphing sex partner in porn, Harry Reems; Chris Noth is an identikit porno boss; Hank Azaria plays director Gerard Damiano with merkins on his chin and his noggin, and Bobby Cannavale his partner in something or other. As her father, Robert Patrick (“Terminator 2”) has a chilling phone conversation as he tells Linda he’s seen her porno: this is a slap of a film in a single setting that we don’t get elsewhere. Yet the overall cartoonishness of the enterprise irks, especially when the true story of the mob’s exploitation of tens and even hundreds of millions of dollars in proceeds, contrasted with the indignities visited on this single soul, would make a fantastic cockroach epic. Despite its depiction of violence against its protagonist, “Lovelace” is frisky where it ought to be foul. If memory serves, the only nudity is Seyfried’s as she plays the exploited Linda Boreman. (She’s insistently barefoot through most of the movie, for those who might take an interest.) The blink and you’ll miss them cameos include Debi Mazar (two minutes), Wes Bentley (a minute forty-five?), Eric Roberts (a minute?), Chloë Sevigny (six seconds?) and James Franco as Hugh Hefner, who, while offering neither authenticity or interest, is an ideal Hefner in that he seems to have merely shown up. 92m. (Ray Pride)