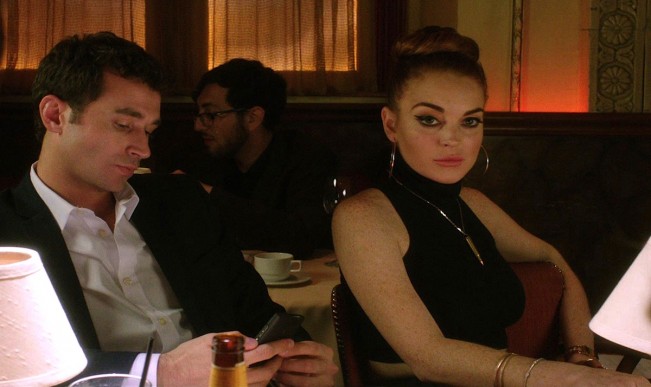 “Who’s really happy? Tell me.” As a glimpse of where the feature-length narrative industry lies, there’s modest pathos underlying “The Canyons,” directed by Paul Schrader from a script by Bret Easton Ellis that Schrader suggested after their collaboration on a shark movie lost finance. “Beautiful people, nice rooms, bad things, and sharp talk. How expensive is that?” Schrader told screenwriter Larry Gross of the film’s origins in the July-August Film Comment, adding, “Bret was very concerned it not look like a home movie.” Ellis’ well-honed affectless fecklessness doesn’t benefit from oxygen as it rises off the page. And in all of Schrader’s screenplays and in the eighteen features he’s directed, would never have earned the nickname “Mr. Warmth.” Yet, to say that this modestly budgeted collaboration is near-clinical in its chilliness doesn’t constitute criticism, only an accurate description. It’s an affirmation.The best attribute lies offscreen, in Schrader’s own articulate testament in a spate of interviews about the state of his career and the theatrical experience of consuming movies. There’s integrity in his words. In the film, Christian is a trust-funder, bound by his father to his therapist (Gus van Sant), claiming to be a producer, ready to make a slasher film in New Mexico. His girlfriend of a year, Tara (co-producer and New York Times Sunday Magazine attraction Lindsay Lohan), joins him in casual, hasty sexual assignations, leading to jealousy with several friends with overlapping histories of body-fluid exchange. Christian is played by porn performer James Deen, a small, often shirtless man in the non-performance performance school of James Franco. Playing a banty near-attractive creep, Deen is an unpleasant screen presence, which seems the point. Cocking an eyebrow, rumpling the wrinkles on his forehead, working his sallow sneer and superior squint, he attends to Christian’s airheaded concerns and airheaded language—“Fact of the matter is”—with straightforward vacuity, sneering at “old-school shit about fuckin’ propriety.” Then again, Ryan (Nolan Funk), the blond from Tara’s past, who may or may not get cast in Christian’s movie, is even worse—“I love you so much, baby, we had so much fun together. I never got over it when you left, it killed me.” Lohan has sparks, all freckles and reaction shots, little-girl-voice gone to rasp and ruin, but little tinder from which to build a fire. Or, as she tells Ryan, “This dumb little movie is not going to do anything for you.” (There are non-referential dialogue boners as well, including “Suck me off, you know you want it.”) Are these bad performances? Or are the performances suited for the movie? Yes. And yes. It’s discernibly a Schrader film in form, especially angles chosen in architecturally nuanced settings, encasing its figures, who move like the screen-cursed zombies they are. Pulp fate awaits them all. Drawing from the Ellis universe, each character is successively betrayed by their fistful of screens, bearing pics and porn and texts and sexts. Aside from the ragged look and erratic sound, there are unpleasant images to spare, such as Christian’s dirty feet rising into the air as he goes down on Tara for a freshly recruited spectator, who masturbates ineffectually, and a four-way, blitzed by lava lamp, that looks extremely disagreeable. Positioned as a film after the end of “movies,” including intermittent stills of abandoned cinemas not directly related to the characters, “The Canyons”’ most successful invocation of its own status and its aspirations to termite elegy is a scene set in the warehouse-like, multistory Amoeba Music, bearing chill freight. Each VHS carton and DVD box in racks and rows are tombstones of product past, of fallen figures from a film industry where smarter people could make a life’s living from telling stories on-screen and off. American Apparel is credited for “Wardrobe Consultation.” 95m. (Ray Pride)

“The Canyons” opens Friday, August 16 at Facets. The Seventh Arts’ rich eighty-minute interview with Schrader is below.