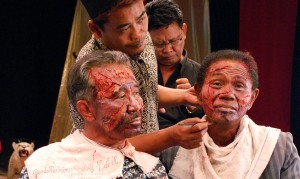 A punchy, audacious, sometimes hallucinatory masterpiece that’s a documentary, a brutal comedy and a stylized musical, combining bruising horror and burlesque, neighborly genocide and the banality of vanity, “The Act Of Killing” is a pitiless wonder. Co-director Joshua Oppenheimer shot for several years, beginning by recording the boasts of unrepentant killers who had murdered “subversives” and “Communists” at the behest of Indonesia’s Suharto regime. An elderly man named Anwar Congo was his forty-first subject, and the finished film is structured around his bravado, weird charisma and discernible flickers of discomfort as he takes credit for a thousand or so killings in the larger genocide. Oppenheimer (co-directing with Christine Cynn and an “anonymous” Indonesian) suggested that they reenact their slayings in the style of their favorite movies. (They thought of themselves as movie killers, claiming to have left an Elvis Presley movie, dancing and ready to garrote a “leftist” neighbor.) Will these fictional “acts of killing” prompt any kind of reflection by these hardened, cheery braggarts, still celebrated as heroes on the streets, at political rallies and on television?

“I don’t believe, in any way, that violent movies create violence,” the thirty-eight-year-old Oppenheimer told me in a free-flowing conversation at the 2012 Toronto Film Festival. “I think they inflect how we imagine ourselves, and how we take pleasure in violence. And that is a difficult and provocative thing to say, that we take pleasure in violence, but we are the only species that gathers together on the playground to watch each other beat each other up and scream ‘fight, fight, fight, fight.’ No other species enjoys watching violence. Other species, they either join in because of some sort of maybe instinctive reason to join in. Or they run away. But we enjoy it, if not all of us. I’ve never enjoyed it, but I only once was in a fistfight. I was in the second grade, I was being bullied, I hit the guy, and I took real pleasure in the moment of hitting him. And I sort of fired up to hit again, and I think I lost. And that was it for me. But there is a rush and a thrill to power and to violence. An interviewer said to me yesterday, ‘I think those men must have never felt as powerful and as alive as they did in the moment that they were killing.’

“I think it’s interesting,” Oppenheimer continues without a break. “I think in some ironic way, when they’re reenacting what they do, they perhaps think that they are making it okay, what they did. As Anwar says several times in the process, ‘I want to make a beautiful family movie about what we did.’ Well, the idea that he’s making it okay, by representing—he’s trying and he fails—but to represent, as something as beautiful and okay. At the same time, I think he is compelled to tell the story in the same way as victims of trauma, although I am not saying that they’re victims. But they’ve been through a trauma that is undeniable. They’re compelled to tell the story, to repeat it, to make it okay, the way we produce scar tissue around a wound. But I think something happens that’s unexpected in that journey for them, which is that they find that they are reliving. Not just acting. At the time of the killing, Anwar came out of the cinema, feeling like a gangster after a gangster movie, feeling like Elvis after an Elvis movie, and then acting was always part of the act of killing for Anwar, acting was always part of the process, it was a resource of the act of killing.”

So it was always an “act.” “It was. So when he reenacts it for me, hoping perhaps to make it okay, to make it beautiful for the public, to make it okay for himself, something banal enough that he can speak about without trembling. But nevertheless not giving up the goal of making it frightful to the survivors who live around him, who he seeks to intimidate and keep docile, through what he hopes might be a show of force. He actually finds that he is re-experiencing, or experiencing again. A mode of performance, a kind of acting. A behavior, a way of being, a form of subjectivity. It’s very similar to what he was in, in 1965, when he was killing people. I don’t say the same, because he is not killing, and that’s my crucial point at the end of the film. But similar enough that he slips into a kind of trap. That I didn’t lay for him, I didn’t anticipate it. I had him dramatize what he did, because they wanted to. And because I understood that was the best possible way to understand the big story in front of the camera, which was not what happened in 1965. Although that’s important, that would be an interesting historical documentary or book. But what is the nature of their impunity today? Who are they boasting for? What is the purpose of that boasting? How does it perform in the world? I was trying to understand, how does this society imagine what they’ve done? How do these men imagine what they have done? If I bring them together to reenact together—I bring in ministers from the government, leaders of the paramilitary group, other, younger paramilitary members. How do they collectively tell the story? How do they navigate the story among themselves? But in that process, this unexpected thing happened, where I think Anwar was trying to deal with his trauma, by reenacting it, and making it ‘beautiful,’ as he says. And by at least recognizing it, hoping that through the volume of repetition, he’s recognizing the trauma again and again and again. Every time he plans a reenactment, he says, ‘Our film is going to attract such a great audience, because there has never been a film where real killers are killing people.’ He thinks that’ll make it beautiful, and attract an audience. And it has great scenery and a love interest, and it’s fantastic. He’s trying, through the force of insistence, insisting again and again and again that this will be okay, to bury his trauma even as he is reliving the mode of performance that he was in at the time, the disassociation from reality that he was in at the time. And I don’t like this word, disassociation from reality, because actually, it is reality. We are constantly disassociating. I am disassociating from something in myself, by talking to you in this focused way. I am talking to you. He was killing… I think he slips into a trap in a way which none of us understood. It was very painful for him and very painful for me, and very painful for the audience.”

“The Act Of Killing” opens Friday, August 16 at the Music Box. The U. S. trailer is below.