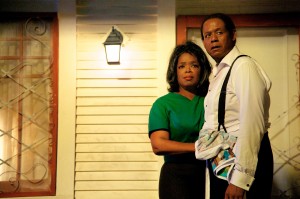 Even coming from the filmmaker behind “Precious” and “The Paperboy,” some prognosticators had expectations that his latest film was going to be docile, was going to be very uplifting. When I suggest that to Daniels, he cackles and then breaks out in huge laughter. This is not that movie. An ever-stoic Forest Whitaker plays a character based on Eugene Allen, a White House butler who witnessed more than fifty years of twentieth-century history up close, but Daniels and screenwriter Danny Strong aren’t quite after “Forest Whitaker Gump.” It’s also an expansive, ambitious attempt to weave an epic family story against the backdrop of the Civil Rights era. Whitaker’s character, Cecil, observes, has to remain an observer, and yet others around him say, ‘Why don’t you act?’ and eventually his son, headstrong, says, ‘You have to act. You have to be political.’ His son, played by David Oyelowo, participates in each successive movement across the 1960s. But all the figures around Cecil, outside the White House, are a whirligig going, ‘No, to be non-political is a choice. If you don’t protest, you’re in tacit agreement, you’re part of the silent majority.’

“Here’s the thing,” Daniels says in his dramatic cadences, “I remember. I’m fifty-three, so I remember my parents feeling a little nervous about Martin Luther King. They looked up to him, but they were a little nervous, he was causing something. And then they were terrified of Malcolm X. Absolutely terrified. Black Panthers came around? Forget about it. Completely forget about it! They were all heroes, in their own way, and I have kids. I have twins, and I know I could take a bullet for the kids, they are life and death and to me, but I don’t know if I could take a bullet for a cause. These kids were on the front line. And not just black kids, but white kids came. People think that this is like this black story [but also] it’s about the white kids that came in, because the black kids  had been told that we dare not go out. So white kids would come up, say, we’re coming with you. Who the fu—? Y’know. It’s a powerful time to write about. To talk about. It was a proud time to be an American, I think. Kids ain’t doing that shit today!”

It’s only a few moments into the movie before we see a shot of two lynched men hanging from a tree, and behind them, an American flag, no breeze, it’s draped down dead weight like the men. Details like that pop in every scene, as multiple dramas roil. And there are acts of startling, bold crosscutting, especially a scene where a dinner service at the White House is intercut with a lunch counter sit-in by students in the South that leads to violence against them.

“The Woolworth’s scene,” Daniels says, quietly. “Yeahhh…. It was important. We didn’t write it like that, but it just sort of happens like that, where the word was, serving our country. Who was right? Was it Forest’s character? Or was it David’s character, the son? Who served the country best? Was Cecil serving it by making the white man comfortable, by being subservient? Or was it Louis, who was out there fighting? I ponder that often; I don’t know the answer. What I do know is that we haven’t gone anywhere. I go overseas a lot—people, journalists ask, how is it possible you have an African-American president with all this racial tension in America? And I can’t quite answer that. 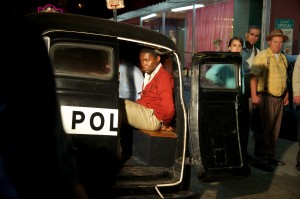 Among the teeming cast, each actor gets small, privileged moments, from the sexy sashay of Jane Fonda’s Nancy Reagan to several scenes where Oprah’s character remains a simmering, lusty woman across the years, including a monologue putting on lipstick in front of a mirror that’s a small wallop. Daniels laughs. “Here’s the thing, man. Everything that I do is based on if I don’t know it, if I haven’t lived it, if I can’t smell it or feel it? I don’t shoot it. It has to be completely, unequivocally, 100-percent true for me to, to shoot it. Otherwise, it’s not the truth. People can poke holes at it, but you can’t poke holes at what I know to be true.”

“The Butler” has a key phrase that resounds through the years in differing cruel fashion: somebody’s always ready to call Cecil the “house nigger.” It’s a cudgel for white and black alike. “I can hurt you with this.” “When we were having the dispute over what the title was going to be, I said, ‘House Nigger.’ Let’s fuck with them all! And just say ‘House Nigger’! Y’know? Oooh. That would get everybody talking! I don’t think you’d get anybody in the seats, though,” he says with a sly smile.