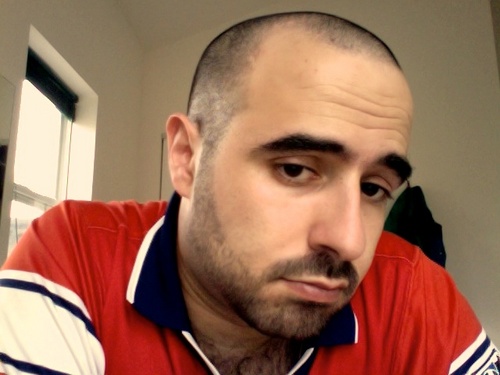 Cyrus Dowlatshahi gives the impression of a man entirely at ease with himself. He curses casually, refers to himself as “a fucking hipster,” and rhapsodizes about watching people play basketball in Englewood and drinking Old Fashioneds in Lincoln Park. Dowlatshahi, thirty-one, is currently at work on a feature-length documentary about the South Side. “I had to try and make my own movie, like a bigger project, a longer project that’s more in-depth than just the shorts that I’ve always made since, you know, way back when. And I couldn’t really think of anything better than the South Side.”

Although Dowlatshahi holds a steady job as a videographer for Al Jazeera, he has gotten his funding from alternative means. After getting a philosophy degree from Vassar, he became a part-time masseuse to support himself and his nascent filmmaking. A $25,000 Kickstarter campaign in 2011 paid for Chicago film permits and equipment, and, with crowdfunding under his belt, he began to shoot.

Shooting on the South Side (film, of course), is nothing new for Dowlatshahi, who started at a young age. “I grew up with a mini-DVD camcorder when I was sixteen and I just started taping stuff.” His Hyde Park upbringing provided the fodder for much of his earliest footage. If you haven’t seen Dowlatshahi’s films, you may have seen his car, which he got while he was a teenager at the Lab School. He drives a small sedan, covered in a jungle camouflage pattern. His first film projects involved the car: “We painted University of Chicago Secret Police on it. It was like we were a fictional law-enforcement agency, just riding around, mainly fucking with U of C kids, and also following police action on the South Side.” 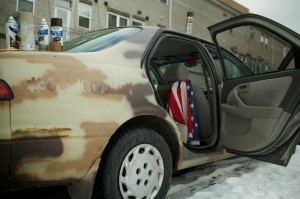 These early adventures help shape his current interests. Dowlatshahi, who speaks with a rolling laugh, is keen on approaching his subject matter as straightforwardly as possible. “Some people say, places like the South Side, they think it’s dangerous. Roll up your windows, lock your doors, and like drive through. I’ve always wanted to be like, oh, why don’t we go that way, that’s where they say don’t go, and like roll down the windows, and like maybe get out of the car. That’s just always been my reaction.”

This kind of freewheeling attitude has landed Dowlatshahi in strange straits, and put him in contact with flamboyant characters. One guy called “Jerk Man,” gives a tour of the South Side in the film through the lens of the chicken that he sells. Although he still has a while to go on his feature film—“I would like to be done in a year”—much of the filming has already been completed, and much of it has come to life through Dowlatshahi’s fluid approach to storytelling, and to finding scoops.

“I like talking to people. I’m filming, so if somebody’s doing something and I’m like, ‘Hey can I film you?’ Like Jerk Man driving around the hood selling jerk chicken, if he’s like, ‘hey man, you should come with me, I’ll take you on a tour of the hood,’ I’m gonna be like yes! And through him, I might meet somebody else. And you naturally just meet people.”

Most of Dowlatshahi’s work to date has been in the form of short clips. His early “Secret Police” videos max out at five minutes, while a project about a recent trip to Iran (Dowlatshahi is Iranian-American) goes just over three minutes. That being said, his films are extremely intimate, and force the viewer into a stunningly close interaction with the subjects. His video presents a warmly detailed encounter with Iran in under three minutes, telling the story entirely without dialogue, with only Farsi tunes blaring in the background.

“I’m Iranian, and Iran has a reputation of like being a bad place, or a dangerous place, and the people are crazy—but that’s not true at all.” Dowlatshahi’s heritage pushes him toward the same iconoclasm that draws him to the South Side. That iconoclasm, however, runs into the real, concrete concerns that shape the public image of violent crime and poverty on the South Side. Dowlatshahi has directly encountered these issues in the course of his filming, and has no qualms with confronting them.

“People I’ve filmed have died…I’m still in disbelief that that happened, to be honest with you. I’m not gonna really lie about it.” The issue of violence, and the ethics of “documenting” the South Side as a whole pervades Dowlatshahi’s work and, to an extent, his psyche. “I know people who wanna deny that violence exists. And the flipside of that is thinking that because there’s a lot of shooting in this neighborhood, that violence is like the defining characteristic of what life is like there, and that’s also not true. People are going about their normal lives, like anywhere else.”

Dowlatshahi’s view of what he documents is firmly grounded in the realities of the neighborhoods. He has done much of his filming in Washington Park and Englewood. Dowlatshahi, however, is keen on avoiding an anthropological image, or, as he puts it, “avoid[ing] being the British explorer who’s going into the bush to see how the savages live.” At the same time, he takes a darkly sardonic eye to what goes on in the areas that he films, and to what his status as a wealthy outsider really means to the subjects of his movie.

“No one wants me to come in [to their neighborhood] and do a documentary about violence. Like why should I give a fuck? It’s not my neighborhood. I didn’t grow up there. It’s not my friends getting killed. I’m like ‘Hey, I feel bad for your friends getting killed, Jerome. And I’m gonna get back in my car and go back to Lincoln Park, and have a fucking Old Fashioned like the douchebag hipster that I am.’”

Dowlatshahi is clearly conflicted about his films. And yet, there is little reluctance on his part to soften his messages. His short films, from the montage of Iran to a recent report for Al Jazeera on Chicago gun violence, are all extremely direct: Iranian spice merchants look you in the eyes; the mothers of gunshot victims level you through the camera. In this vein he pulls no punches about what he sees going on around him. “There are plenty of things that ignorant-ass motherfuckers are doing in the hood, that I’m not gonna be like pretending isn’t ignorant-ass shit. I might be from Hyde Park and went to private school, but ignorant-ass shit is ignorant-ass shit. If you have a kid, you better feed them and clothe them before you buy like $250 basketballs. That’s dumb. And like I will make fun of people, because that shit happens.”

Although Dowlatshahi isn’t yet sure about the film’s final look—“Right now I’m kind of like, figuring out how I want to put the footage together”—he still has to finish filming and to wrap up production. He’s involved in whatever he shoots, be it his parents’ homeland of Iran, stalking the University of Chicago Police Department, or the ins and outs of neglected Chicago neighborhoods. Dowlatshahi has no problem facing the reality beyond the camera, and enjoys it. “I’m definitely filming in the ghetto. But, I kind of like the ghetto to be honest with you.”