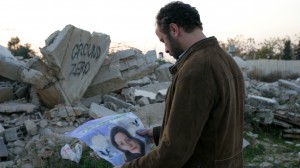 At once concrete in its physical details and elusive in any readily definable philosophy, Lebanese director Ziad Doueiri’s “The Attack” draws its story of radicalization and suicide bombing from a well-regarded novel by Yasmina Khadra. After a suicide attack, a Palestinian surgeon (Ali Suliman) working in Tel Aviv discovers that his wife (Reymond Amsellem) was the bomber in an incident that kills seventeen others. Layers of narrative are revealed, but motivation remains vague, intangible. It’s a contemporary movie mystery, working, for the most part, with admirable tension: how does society work when we fail to understand, care to understand those closest to us? What does the larger picture mean when we fail to notice, nurture, become concerned about the smaller, smallest, personal ones? The journey to knowledge begins too late for some. Questions remain, even for the viewer, after “The Attack” ends. (Douieri’s earlier films include “Lila Says” and “West Beirut”; his apprenticeship included work as Quentin Tarantino’s camera assistant.) With Yevgenya Dodina, Uri Gavriel, Karim Saleh. 105m. (Ray Pride)

“The Attack” opens Friday, August 30 at the Music Box, Evanston Cine-Arts and Renaissance Place. A trailer is below.