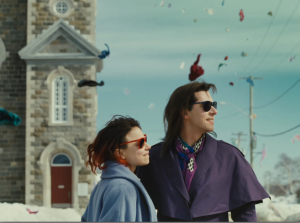 “Laurence Anyways” is drenching melodrama, reckless, ravishing. Actor-writer-director Xavier Dolan has shot a fourth feature since, and he’s still only twenty-four. His style, to some, may seem overheated, flamboyant, baroque, immature, indulgent, extravagant, but it is what it is and what it is, at his keenest moments, is fabulous. Sprawling and decade-spanning, the Québécois filmmaker’s script charts the changes in the life of Laurence (Melvil Poupaud, “A Summer’s Tale,” “A Christmas Tale”), a Montreal literature teacher and award-winning novelist of thirty-five who announces to his girlfriend, Frédérique (Suzanne Clément), that he intends to make the transition to being a woman. Fred now becomes Laurence’s best female friend, too, showing Laurence how to create and to dress a female identity. Affinities to Almodóvar and Fassbinder abound, and Laurence’s transgender impulse rings variations on “In A Year Of 13 Moons,” one of Fassbinder’s last movies but more doom than bloom.  Dolan’s esthetically elevated, sustained perambulation through the lives of these two characters (as well as his chilly mother, precisely played by Nathalie Baye) is its own roller-coaster of emotion. Saturated color sears the screen: there is no place for beige in this world. The emphatic musical choices are ravishing in their placement and emotional power—Kim Carnes’ “Bette Davis Eyes”; The Cure’s “The Funeral Party”; Celine Dion; Visage’s “Fade to Grey”; Duran Duran; Depeche Mode; Stuart Staples—but also indicate Laurence’s fully-developed, wholly apart inner life. (Dolan is one profligate little magpie.) Laurence has not just thought of himself as female, but as someone whose intense feelings reign, not only to the point of isolation from society, but beyond, to an emotional volatility protected and nurtured by Fred. Love makes the world fantastic, surreal. Clément, as Fred, works the kind of over-the-top style that gets under the skin: she has overwrought moments that could make you tremble (or quiver). She is fury, and fury acts and reacts. Clément contains multitudes of anger, and a sustained scene where she bawls out a rude waitress is volcanic yet precise. The cinematography by Yves Bélanger is a sustained swoon. A former child star, Dolan also works as a voice actor for Québec dubs of American films, including Pi in “Life Of Pi,” Peeta in “The Hunger Games,” and “Brainy Smurf” in “The Smurfs.” Dolan’s already an influence on others: Paul Schrader told BlackBook magazine that seeing Dolan’s second feature, “Heartbeats” got him to “The Canyons”: “There is no style anymore. [But in “Heartbeats,” Dolan] keeps changing, and he doesn’t really care if one scene doesn’t match the scene before it. And I said, there’s nothing wrong with that, that’s where we are, that’s the new kind of style.” Yes… perhaps. “Laurence” weighs in at a behemoth 169 minutes. If you like it, you’ll want more. If you don’t? You might not make it that far. Me? Pretty thrilling. Gus van Sant takes a presentation credit. With Monia Chokri. (Ray Pride)

“Laurence Anyways” opens Friday at Facets. A trailer is below.