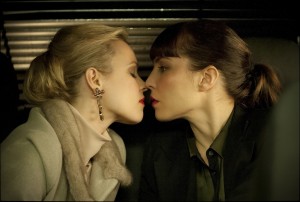 The most recognizable of Brian DePalma’s movies start as japes on storytelling and style and contort from there: however much his movies theoretically resemble the work of others (such as Mr. Hitchcock), they have become unmistakably his own, characteristic in particulars like lengthy tracking shots and sometimes superfluous split-screen, plus a leer or two of lurid imagery, a bit of the old stabby-stabby. But as with, say, “Body Double,” which looks like a radical film from another culture altogether (oh, right, it was: it was 1984), or the great, emotionally swamping “Blow-Out,” his movies now, after a long career, look like no others. Baroque flourishes are simply his signature. Even a cracked, not-so-good movie from the seventy-two-year-old director, like “Passion” (based on Alain Corneau’s final film, 2010’s “Crime d’Amour,” released here as “Love Crime”), holds clinical interest even if fatally miscast. For Corneau’s original, the French veteran cast Ludivine Sagnier and Kristin Scott Thomas—differences of age, class and motivation were keenly defined, there was sphinx vs. minx physicality from the get-go. DePalma’s got Rachel McAdams and Noomi Rapace, both marvelous presences in other movies, but as the two corporate strivers-competitors at the Berlin office of a multinational advertising agency, they make little impression beyond wardrobe and lipstick. The plot turns pile on. From reel to reel, “Passion” plays less like a succession of expected DePalma setpieces, than as individual, shorter films, each in their own volatile, sometimes clumsy fashion. I’d like to think that’s intentional, along the lines of the unstable, fluctuating point-of-view of Olivier Assayas’ “Demonlover,” but that’s wishful, just like thinking the odd, arid sound design came from something other than an undernourished budget. Almodóvar’s cinematographer José Luis Alcaine shot “Passion,” or at least, that’s his name in the credits. Reviewed in 35mm. (Ray Pride)

“Passion” plays Friday and Saturday midnight at the Music Box.