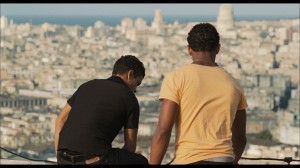 First-time director Lucy Mulloy brings a documentary eye to the bold and lovely “Una Noche” (One Night), a tactile, crackerjack thriller that follows the lives of three teenagers who want to escape twenty-first-century Havana for a life not lived in back alleys, across the water, to America. Naturalism and vitality spike each of the non-professionals’ performances: this is a sensual, even sexy film, enhanced by its beaming optimism and hope. The sun beats down, and the city’s spoiled splendor is never shown as paradisiacal, but Havana’s street life is part of the kick. Miami’s only ninety miles away: they know there’s more to life ahead than simply to “sweat and fuck.” The city has stood still for five decades; these three won’t. The great Leslie Shatz shares sound credit. Spike Lee takes a presentation credit; “Una Noche” won best actor and best cinematography at the Tribeca Film Festival. With Dariel Arrechaga, Anailín de la Rúa de la Torre, Javier Núñez Florián. (Florián and  de la Torre, who play fraternal twins, escaped from Cuba and are expecting twins.) 89m. (Ray Pride)

“Una Noche” opens Friday, September 6 at Siskel and is available on VOD. The trailer is below.