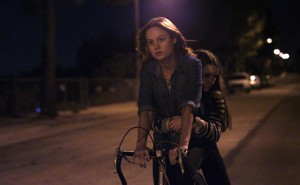 The modesty of means in small modern movies sometimes offers a richness of opportunity, and filmmaker Destin Daniel Cretton has mined that seam with Brie Larson’s performance in “Short Term 12.” This year, Larson has small, sturdy roles in “The Spectacular Now” and “Don Jon” (as well as “the United States of Tara”), but playing Grace, a supervisor at a foster-care facility for at-risk teenagers, she excels. Fierce, honest, reflecting her character’s substantial conflicts, suggestive of deeper and deeper currents, it’s the kind of performance that actors beg for in larger, more costly movies. “Short Term 12” may be too small to register to the voters of the big year-end awards, but that will be to their loss, but not to those who catch twenty-three-year-old Larson’s rich, vital work. That same kind of delicate intimacy resounds throughout Cretton’s film, suiting a story of youth in search of definition. With John Gallagher, Kaitlyn Dever, Rami Malek. 96m. (Ray Pride)

“Short Term 12” is now playing at Landmark Century. The trailer is below.