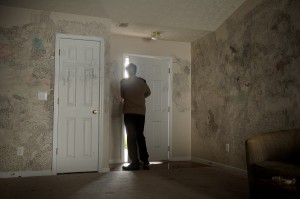 “Man hands on misery to man,” poet Philip Larkin wrote in “This Be The Verse,” “Cruelty deepens like a coastal shelf.”

At a brooding simmer of two-and-a-half hours, the lyrical, sorrowful “Prisoners” hands on misery to man time and again. “Prisoners” hurts. Aches. Broods. It’s a rivulet of solemn, hardly repressed rage and misguided faith in one’s own righteousness, goodness and decency. Can redemption follow revenge? It’s also about a father, Keller Dover (Hugh Jackman), a small-town Pennsylvania carpenter who lives his maxim, “pray for the best, prepare for the worst,” whose young daughter, Anna, goes missing one Thanksgiving along with the child of another couple (Terrence Howard, Viola Davis). A young man named Alex Jones (Paul Dano) is suspected, interrogated by one Detective Loki (Jake Gyllenhaal), then released, to Keller’s anger. Keller’s no killer, but he’s prepared to do a terrible thing. Then another. Then another. And then he hopes others will understand… The twists and shifts do not stop.

The MPAA is unusually circumspect in its reasons for rating “Prisoners” “R”: “disturbing violent content including torture, and language throughout.” Makes you wonder: is there an “R” for “titillating violent content”? A PVC for “Pandering violent content”?  “Prisoners,” directed by Québécois filmmaker Denis Villeneuve (“Maelstrom,” “Incendies”), written by Aaron Guzikowski (“Contraband”), produced by Alcon Entertainment (“My Dog Skip,” “Sisterhood of the Traveling Pants,” “The Blind Side”) and released by Warner, is a somber rebuke to recent movies that could’ve, should’ve gotten that “PVC” rating.  While the advertising tagline “How far would you go to protect your family?” is sturdy and accurate enough, a key part of the impact of “Prisoners” is that “Real violence hurts.” “Prisoners” is no “Taken,” with its roller coaster of Liam Neeson looking for a kidnapped daughter, it’s not “Saw,” with torture victims kept in captivity, but it does partake of story elements familiar from those and other exploitatively themed pictures. It’s “Taken,” taken seriously, but also “Saw,” seen from an ordinary man’s protective impulses.

As shot in a monochrome palette by the great Roger Deakins (“Skyfall,” many Coen brothers films), the rain brings its own grey-blue gloom to the pallid faces fearful for the fate of the two children. It’s doomy and luscious, and a wondrous example of what a gifted director of photography can do with today’s digital capture instead of shooting on film. Menacing, heavy rain. A world of overcast, a world of pain. The images say more than words. A world with no escape. “There was a gas station in the background, with mercury vapor lights,” Deakins says in the press kit of the technical means. “The police cars have blue flashing lights, and you don’t want to overpower them, so you tend to work wide and open. We were basically shooting the action with the high-powered flashlights in the hands of the actors so we could get a decent beam and a good, hot image out of them.” This kind of immediacy, and low-light luminosity, suffuses “Prisoners.”

Villeneuve is no stranger to stylization; his cool visual esthetic in movies like “Incendies” isn’t to everyone’s taste, but he’s consistent, each bit of each frame matters. His 2009 “Polytechnique,” about a school shooting in Quebec, shot in black-and-white widescreen, is near-unwatchable in its fierce, subjective intensity. Here, the color of  blood seep from a felled deer, a slight magenta slurred in rain, will recur as the soft light in a missing girl’s bedroom, a beauty both pernicious and haunting. Even the smallest detail shown for the briefest moment—a gas mask in silhouette in a survivalist basement in the corner of a frame, eerily resembling a detached head—will find its double later. Villeneuve finds visual rhymes to match the clean narrative doublings of Guzikowski’s script. There are plot twists and reversals, but the film is richest in offering dual versions of characters’ beliefs. The sacrifice of a child, the sacrifice of a life, games, puzzles, monstrous misapprehensions of faith itself: despite the two missing girls, and other missing children, is how any stated belief in the story will find its evil twin, and holding fast, holding angrily, is what will destroy you.

The only element that felt out-of-place, a little pushy, was a recurrence of notes from a church organ in the otherwise effective score. But with the end credits, when composer Jóhann Jóhannsson’s name came up, it made a little more sense, with the composer bringing an Icelandic liturgical component added to the chilly mix than one final, bruising, pious note that would force any religiosity to the fore. Thinking back later in the day after seeing “Prisoners,” though, it all clicks: it’s an amorality tale, dotted with beating and shooting and torture and swearing, but also with a pang of melancholy, shame for the potential of ignominy in good intentions, all of ours.