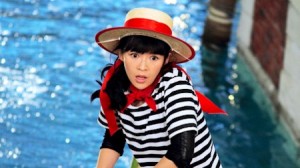 While big-budget Western movies have made concessions to distribution in China, including adding scenes (“Iron Man Three”), changing locations (China substituting for Paris in “Looper”), have Chinese filmmakers? The gloss and goof of “My Lucky Star,” a big-budget romance about a diamond heist, an innocent woman and a handsome spy, starring Zhang Ziyi and Leehom Wang, and opening at China-owned AMC Theatres around the country, the answer seems no and maybe. The choice of director would be the maybe: among her earlier credits, Yale Drama grad Dennie Gordon worked on “Dawson’s Creek,” “30 Rock” and directed the Olsen twins in “New York Minute” and David Spade in “Joe Dirt.”  The globetrotting shenanigans, bounding from Beijing to Singapore, Macau and Hong Kong, are broad and varied, both broader and more various than you’d expect, but it’s obviously a big-budget canvas (and a prequel to “Sophie’s Revenge,” an earlier domestic success). It’s almost charming in its anxiety to impress, but Zhang Ziyi and the location managers are pretty much all that kept my eye on the screen. It’s almost charming. 114m. (Ray Pride)