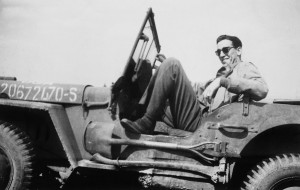 A lurid wash of bombast and surmise, the nonfiction collage-cum-stalkumentary called “Salinger” lacks even the decency to find a filmmaking form in which to nest its shaggy head. While a 600-plus-page scrapbook has been published to tie in with the film release, assembled by writer-director Shane Salerno (“Armageddon,” “Aliens vs. Predator: Requiem”) and his researchers, the number of revelations about the privacy-protecting late author J. D. Salinger, along with a few striking snapshots, could fit nicely into a small pamphlet, a glossy brochure about the size of one you’d find among the local attractions brochures at a small motel. The film is amply padded, however, including an unfortunate device of having “Salinger” type his work on a stage in a theater while scenes from World War II and other passages of his life play out behind his figure. There’s also an ungainly amount of tawdry suggestion about Salinger’s predilection for the company of much, much younger women that implicates the audience by forcing us to figure out what’s being suggested, rather than a case being demonstrated or proven. The talking heads include a strange range of cultural figures who were placed before the camera in the film’s near-decade of production—Edward Norton? Robert Towne?—but the panoply of writers who have written about Salinger come across as a scary lot. The worst is Paul Alexander, whose book is cited as being the source for “Salinger,” a disagreeably nasal, sneering, superior, odd-looking figure who would have made an inspired fictional creation but seems like the worst sort of louse on camera, especially with his multitudes of pepper-and-salt goatees and black-on-black ensembles that change almost each time the film returns to his small brace of banalities. (There’s also an unctuous, over-tanned antiquarian bookseller, wearing a purple-on-purple brocade vest almost as twee as his patter.) The brutal score by Lorne Balfe is fulsome, aggressive, chock-a-block, incoherent, and forgettable from second to second. Which, come to think of it, may suit the tattered delirium that is “Salinger.” Notably, no excerpts from Salinger’s work or from his correspondence appear in the film. 123m, down from prior 129m. (Ray Pride)

“Salinger” opens Friday, September 20 at Landmark Century and Renaissance. “Salinger” was revised by its distributor after its Chicago press screenings; the New York Times reports the material is about “his complex relationships with young women.”