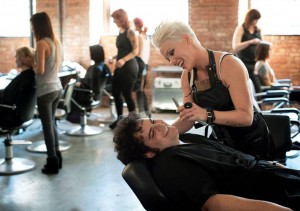 “Thanks For Sharing,” the first feature directed by “The Kids Are All Right” co-writer Stuart Blumberg, is the kind of movie that fails at everything it tries with such complete conviction it convinces you that nothing in its story could ever be true. An ensemble story, I mean, “comedy,” about alleged extremes in sexual addiction among a mostly filthy-rich slice of Manhattan, it functions as therapy as well, largely for the writer-director and at least partially for the audience that wants to see the likes of Tim Robbins mock self-help slogans while embodying them to the deepest level of emotional veneer. As the lead, Mark Ruffalo is jinxed by the editors of the film, who have chosen the moogliest of the oogliest of his performances in any given shot. As the “funny” big man character, Josh Gad is as flat and unappealing as most pretenders to that throne, but his counterpart, played by Alecia Moore, aka Pink, is the movie’s one solid asset, grounded even when her characters’ jokes are flat. (Or in moments like when the pair exchange “555” numbers after a sex addiction meeting.) And Gwyneth Paltrow strips off several times, brandishing her board-flat bottom.  (She also gets to purr the word “veggies” several times.) “Thanks For Sharing” is also one of those scary movies where characters are about to reveal the depths of their souls, but rather than write that scene, which is the hardest kind to write, and the best when they work on screen, the filmmakers choose to cut away to a montage of things happening on the streets of New York, scored to another snore of a song. It happens more than once, when once is almost always more than enough. With Joely Richardson, Patrick Fugit, and Carol Kane, who ought to sue for the panting indecency of her possessive Jewish mother role. 112m. (Ray Pride)

“Thanks For Sharing” opens Friday, September 20.