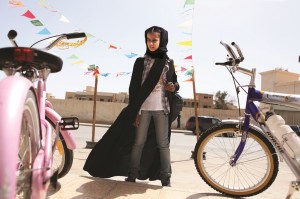 An upbeat story about a ten-year-old girl and a bike, “Wadjda” bears a significant difference from its apparent Eurocentric storytelling style: it’s from Saudi Arabia. Just submitted as the Kingdom’s foreign-language film entry to the Oscars, the film and the title character are equally plucky. Saudi Arabia doesn’t have cinemas, and along its successful way on the international festival circuit, writer-director Haifaa Al Mansour has gotten notice from its promotion as the first film shot entirely within that country and the country’s first by a female director. It’s a feel-good movie about a feel-bad situation, hardly shying from the country’s deep conservatism and essential repression of women. Both its heroine and villain—Wadjda’s mother and her schoolmaster, respectively—are striking, strong, beautiful women, each trussed in different ways by the limitations of their time (but not of their gender). Wadjda’s a little hustler, pulling schemes to make a few extra riyals at school by selling cassettes of underground music, making bracelets of soccer teams, all toward one goal: the money to buy a bicycle, to outrace a boy her age, in a place where women do not ride bicycles, and certainly not girls, who must not endanger their virtue (which extends explicitly to the hymen). But she’s also a kind of supergirl, an unstemmable entrepreneur, who even masters the Koran for a competition among other schoolgirls, her eyes always on the prize: the gleaming symbol of self, that majestic shiny green and white ride. The good and hopeful ending will get you. “It was important to me that the story was an accurate portrayal of the situation of women in Saudi Arabia, and that the characters were believable as ordinary people who have to maneuver through the system the only way they know how,” Al Mansour has said, and her handling of social issues is understated and woven into the complications of her plotting, to impressive effect. The bright dusty streets of Riyadh and homey apartments are nicely shot by German cinematographer Lutz Reitemeier; the relatively spare score is by British composer Max Richter. 97m. (Ray Pride)