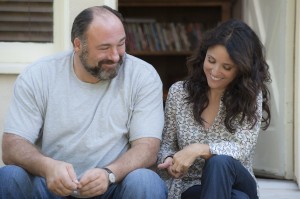 Wry and bittersweet, miniaturist 06: this man was made for grown-up romantic comedy. Fuck, it hurts when that foreseeable title rises up among the first of the end titles—“For Jim”—a whisper of an instant since his character smiled the slyest, most pleased of small smiles. Fuck. “Enough Said,” as with earlier Holofcener titles, like “Please Give” and “Friends With Money,” seems hardly to qualify as a title, more like a designation, or a Post-It with a provisional squiggle on it. But, even more than Woody Allen’s often-lackadaisical monikers, as the credits roll, her titles punch and hug and hold. There’s just this little smidgen of information withheld that eddies into the main dramatic complication of Holofcener’s fifth feature. “Enough Said” is, among other things, about characters who think they speak plainly and directly, but, oh, only if they did, would there be “enough said.” In modern-day Los Angeles, Julia Louis-Dreyfus plays single parent Eva facing her only child’s departure for college, when she meets Albert (Gandolfini), another middle-aged single parent facing the same empty nest. (Cue the complainers who cite “first world problems” who’ve never seen a third world movie.) [A plot turn follows.] In her job as a masseuse, she meets a new client, a poet and name-dropping friend of Joni Mitchell, named Marianne (Catherine Keener), whose attentions flatter Eva. It takes a while for Eva to discover just who the ex-husband she’s complaining about is: Eva’s new find Albert. Holofcener doesn’t go for screwball or slapstick with that simple turn: she just looks more closely at the interactions of Albert and Louis-Dreyfus and of those around them, including Chloe, a friend of Eva’s daughter, played to needy perfection by Tavi Gevinson. Louis-Dreyfus sparkles, in a different register than her comedic “Veep,” and Gandolfini, well. Fuck. Eloquent understatement, fallen greatness. Holofcener’s generous, gentle, genteel, dry, ever-so-slightly barbed comedy is a sweet, nay, bittersweet sendoff. With Toni Collette, Ben Falcone, Tracey Fairaway, Eve Hewson. 93m. (Ray Pride)