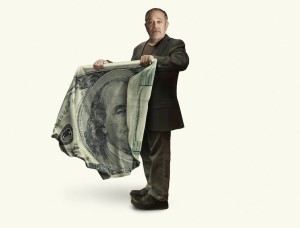 “We make the rules of the economy–and we have the power to change those rules”: there’s a sobering thought after hearing bought-and-bought-again politicians once again talking about wrecking the American credit rating and refusing to do anything to help the economy. After the fashion of “An Inconvenient Truth,” Jacob Kornbluth’s pacey documentary follows diminutive former Clinton cabinet member Robert Reich through his teaching and speaking schedules, on a quest to illuminate the damage that income inequality continues to cause the American (and world) economy. Kornbluth also finds contrarian voices of note, including a Seattle entrepreneur, Nick Hanauer, who says, “Rich business guys like me are not job creators, it’s actually our customers who are the job creators–we are not the center of the economic universe, they are.” Reich charms, informs, confesses, declaims (quietly) but in the end, offers hope and describes practical solutions beyond vote out the scoundrels in order to vote in more scoundrels. What does he believe in most? His students. “I believe that some of you are going to change the community, our society, maybe even the world.”  85m. (Ray Pride)

“Inequality For All” opens Friday, September 27 at Landmark Century.