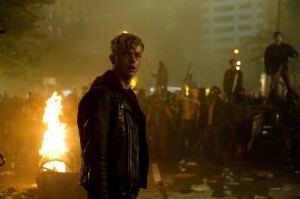 Hungarian-American director Nimród Antal (“Kontroll,” “Predators”) joins hands with the members of Metallica (James Hetfield, Lars Ulrich, Kirk Hammett, Robert Trujillo) for “Metallica Through The Never.” Shot in 3D on a 360-degree stage at a fistful of Canadian stadium shows, with twenty-four swooping, darting cameras on cranes and jibs, as well as cameramen behind 3D Steadicam rigs that dart around the edges of the frame, strange and Taurus-headed figures. It’s fluid work, but the movie also intersperses wordless scenes of a young roadie, Trip (Dane DeHaan, “The Place Beyond The Pines”), on a mission to retrieve a mysterious satchel on quotidian but post-apocalyptic late-night Canuck streets outside. Hungarian cinematographer Gyula Pados (“Evening” and “Fateless” for Lajos Koltai, as well as Antal’s films) shoots protestor-police confrontations as if he were recreating Budapest 1956, and the choice of a green-to-blue color palette suggests work from his countrymen, as in Lajos Koltai’s for “Time Stands Still”: the dank world looks more snot-slicked than rain-smeared. It’s all a potent eyeful, although the ending seemed to come across overly mystifying to the groaning audience at the preview I attended. The sound, as you’d hope, is superb, and editor Joe Hutshing, for what it’s worth—quite a bit—won Oscars for “JFK” and “Born on the Fourth Of July.” 92m. (Ray Pride)

“Metallica Through The Never” opens Friday, September 27 in DCP and IMAX 3D.