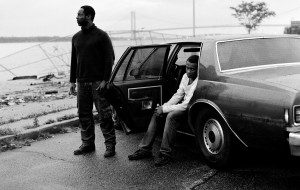 Banality of evil, anyone? French director Alexandre Moors’ debut feature, “Blue Caprice,” locates his protagonists in that near-featureless vehicle, stolidly refusing explanation for the two men who committed a series of sniper killings in 2002 in the Beltway area around the District of Columbia. (Footage from a Gulf War plays conveniently in the background.) Moors has said that he was looking for a true story, to make it simpler, faster to get a movie on screen. He puts how he found the true story of John Muhammad (Isaiah Washington) and Lee Malvo (Tequan Richmond) in a way swifter than synopsis: “It was just a blurb, but it mentioned the pair as being, like, father and son—but they were not really father and son, that they had adopted each other, and that this guy had trained this kid to be an assassin. I saw those five lines, and I thought, ‘My God–that’s a film.’” Moors works with a ragged handheld style for much of the movie, the camera calming only at moments of dark resolve, at gestures toward killings. By film’s end, the film gives over to imagery that would not be out of place in a James Benning film, the title vehicle coursing through the frame to an organ-tinged chorale. The perspective of the camera—our perspective—remains behind the vehicle as it moves through dull landscapes along the interstate, a killing machine, a coffin to make coffins. We are on his shoulder (or, on his tail) and there’s nothing to learn: only the sluice of tires on common pavement toward bleak purpose with cryptic intention. Car runs. Man points. Gun fires. Man falls. It’s creepy stuff, steeped in atmosphere rather than drawing upon melodrama or dwelling within stock psychology. Isaiah Washington is solid, searing. Richmond is a cold heart beating. You break a stone, what would you carve from it? In “Blue Caprice,” the stone stays solid. With Tim Blake Nelson, Joey Lauren Adams. 93m. Widescreen. (Ray Pride)