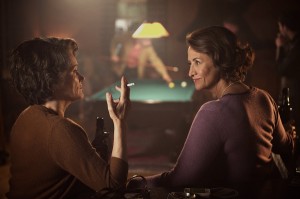 German acting great Barbara Sukowa (“Marianne and Juliane,” “Lola”) rejoins Margarethe Von Trotta (“Rosa Luxemburg”) for a stirring portrait of smart people in troubled times, aka the twentieth century. Hannah Arendt, in neatly appointed Manhattan exile, covers the trial in 1961 of Nazi Adolf Eichmann in Jerusalem for the New Yorker. As events trundle dutifully past, Sukowa’s magnetic, unflusterable presence holds the frame. Cigarettes are smoked philosophically. Moral statements are spoken and bitten straight through. Ideas and notions roll past at the speed of fine conversation. They could talk for hours, and do, at least for two. Janet McTeer’s eyes-wide, eye-rolling Mary McCarthy amuses. Klaus Pohl’s Martin Heidegger is seen in flashback, illuminating swathes of the basis of her thinking and her arrival at her argument about “the banality of evil.” Sukowa has several fine scenes, but a climactic speech is a marvel all around. In German, English, Hebrew and French with subtitles. With Axel Milberg, Julia Jentsch, Nicholas Woodeson, Ulrich Noethen. 113m. Widescreen. (Ray Pride)