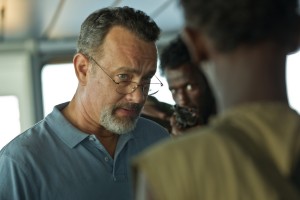 A Paul Greengrass movie that’s thematically understated, tense hostage drama “Captain Phillips” holds its cards very close to its chest. For an hour or so, the particulars of the opposing sides in the 2009 hijacking of the U.S.-flagged container ship Maersk Alabama by a band of Somali pirates is sketched in through studious cross-cutting. While Greengrass films like “The Bourne Ultimatum” and “United 93” have a forceful physical delirium, this one bides its time. But Billy Ray’s screenplay is deft, and the parsing of particular lines lingers: “Where are the elders?”; “You are more than a fisherman. You are more than a fisherman”; “The coward is the first one in the grave.” About an hour in, though, much hell breaks loose. Greengrass’ avid, excitable camera moves begin to match the action, to become the action. Tom Hanks, with an affable but daft New England accent that sounds unduly marble-mouthed, lets the captain’s calculations play quietly across his face in the most tense of confrontations. An opening scene of Phillips’ wife (Catherine Keener) driving him to the airport seems superfluous but for quick details daubed in: the heavy traffic on the highway, cars moving but lined up to the horizon, resembles the shipload of cargo containers he’s about to pilot around the Horn of Africa, but more importantly, the moving parts of commerce that are made possible by the work that he and the other members of such crews do each day. (Their arrival at the departure gate is accompanied by the wry placement of the mundane airport announcement, “Please keep control of your personal belongings at all times.”) At the climax of the drama, another burst of imagery is much more vital, and direct, with a punch of political undercurrent: the horror you have just witnessed, sir, we are all covered in it. As always, despite cinematographer Barry Ackroyd’s customary busy camerawork, Greengrass’ spatial alacrity allows an audience to almost always tell where one actor is in relation to another and there are visual instants, such as an angling of a taut towrope between two vessels in the sustained standoff in the third act, that ripple with geometric force. As Muse, the leader of the Somali pirates, Barkhad Abdi is an electric presence, his character an avatar of intelligence spent by forces larger than himself, larger than us all. With Barkhad Abdirahman, Faysal Ahmed, Mahat M. Ali, Michael Chernus, Corey Johnson, Max Martini, Chris Mulkey, Yul Vázquez, David Warshofsky, Catherine Keener.  134m. Widescreen. (Ray Pride)