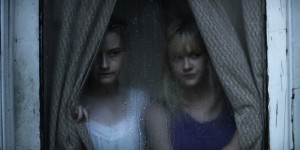 And sometimes we are who we eat. Jim Mickle’s “We Are What We Are,” a revision of Jorge Michel Grau’s 2010 Mexico City-set cannibal chiller “Somos lo que hay,” is a lyrical feat of dread, an atmospheric advance on his earlier tasty vampire entry “Stake Land,” (2011). Bill Sage brings middle-aged gravity—“We do it the way we would have always done it”—to the role of the paterfamilias of the isolated Parker clan, who insists on hewing to his family’s ancient ways. The punkish urban styling of his work with Hal Hartley seems far away, but it’s of a piece, simple, stolid and all the more distressing for its calm. (As is the calm and bloom of the two teen sisters played by the porcelain-featured Ambyr Childers and Julia Garner.) The setting, a flooded Catskills village in upstate New York—shot with a sepulchral gleam by Ryan Samul—is a contrarian one for a movie played like a Western about isolated evangelicals with hard-won, hard-to-defeat beliefs, but an inspired one. The sound design delights the spine: besides the sluice and hiss of incessant wet and its piddling and puddling, there’s also the sound of sets of keys, of ill-oiled hasps, of porcine flesh lightly sliced, the flop of windshield wipers, a pound that thumps at a too-thin door, things that squish by night. Dialogue spins with severe aplomb, incantatory bits like “No flesh, no fruit, no grain” and “It’s the dampness. It gets in my head.” Michael Parks brings weary professionalism to a doctor who recognizes more symptoms in the dead than is healthy for the living. The nastiness builds, And builds. And it is earned. This is glorious tragedy. And tragedy thrives on the bloodiest of recompense. With Kelly McGillis as the helpful neighbor next door. 100m. (Ray Pride)

“We Are What We Are” opens Friday, October 11 at the Music Box. A trailer is below.