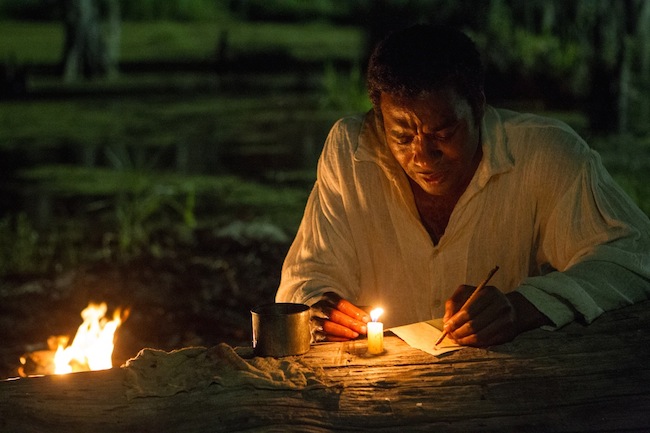 Body and soul: The Steve McQueen Story. From his early notoriety as a performance artist and gallery favorite, the British filmmaker has fixed on physicality and its fragility, measuring the weight between flesh and man. In his 1993 gallery performance, “Bear,” McQueen and another man wrestled naked, as he does in movies with Big Themes: “Hunger”’s starvation artist stands alongside “Shame”’s unstemmable sex seeker. In the emotional avalanche of “12 Years A Slave,” the story of free man Solomon Northup, a pre-Civil War free man from upstate New York who is kidnapped and sold into slavery in the District of Columbia in 1841, McQueen works from ferocity to felicity. Scenes of body horror bear higher emotional stakes than your average horror film. It’s a film of few kindnesses and many graces, alternating between galvanic scenes of injustice or violence with a general air of degradation and the denial of essential dignity, a studio-level elevation of the rarefied visual and performance devices of McQueen’s earlier two features.The soundtrack sings with a chorus of the elevated chirr of cricket song, and its rise and fall is matched by the moments McQueen chooses to focus on a telling visual element for a beat or three longer than usual: three blackberries that could yield ink; a forbidden letter’s last, silk-thread-like embers ebbing against blackness; a close-in shot of the industrial churn of the paddlewheel of boat laden with slaves that rises to reveal the eddy and chop of water left behind, still surging, but falling in moments off to nothing. The widescreen tableaux capture the mute beauty of the Louisiana swamps and bayous, but its ugliness, too, as in one of the film’s longest takes, when Solomon is left tangling from a tree branch, inches, inches from suffocation, and life among the slaves must go on around him. (After Solomon wakes in shackles in a shaft of punishing white light, the camera rises, rises along the brick building, up several stories, and stops at the horizon of Washington, the U. S. Capitol in the distance, near but so very far away.)

The white actors—including slavers Michael Fassbender, Benedict Cumberbatch, slave-seller Paul Giamatti, hateful caretaker Paul Dano, Scoot McNairy, Sarah Paulson—take on wickedness with an avaricious fervor. As a Canadian abolitionist, Brad Pitt speaks words that directly question fealty to immoral or amoral law, speaking to the presumptions of our present passing scene. “12 Years A Slave” rests on the shoulders of Chiwetel Ejiofor, whose transparent, quicksilver presence reflects the temperature of any given moment. The period dialogue, as rendered by novelist-screenwriter John Ridley (“Three Kings”), is toothsome: “My sentimentality extends to the length of a coin”; “You luxuriate in his favor”; “master’s predilections and peculiarities”; “It was hot, hateful scorn that filled those black faces.” “History written with lightning” is a variously attributed quote from the 1915 release of D. W. Griffith’s propaganda-ridden “Birth of a Nation.” With “12 Years A Slave”? Let there be light. “12 Years” is scored to Hans Zimmer’s high-gloss, sometimes “Inception”-level thriller rumble; the precise, often ravishing cinematography is by McQueen’s usual collaborator, Sean Bobbitt (“Place Beyond The Pines”); and the extremely precise and evocative costume design is by Patricia Norris (“Days Of Heaven,” “Twin Peaks,” “The Elephant Man,” “The Assassination of Jesse James By The Coward Robert Ford”).

After the wash of music under the credits, and the impact of the film began to dissipate in the unseasonably warm autumn afternoon, other unconscionable historical moments rushed to mind as students of all races jammed the sidewalk on Lake Street, mingled and smoked and skateboarded in front of Harold Washington College. House redistricting and gerrymandering. Voter repression laws. An ultraconservative Supreme Court. “Tea Party” demands authored by the exotically wealthy who do not wish their property to be taken from them. The government shutdown. Racism has hardly begun to be acknowledged, and questions of class, and dignity, and many, many notions of what it is to be “free” are still blurred in movies and politics and economics and in a city like Chicago. The day was warm and filled with laughter. In the end, “12 Years A Slave” is the truest of horror movie, borne from a memoir, fictionalized, heightened and comprising a wholly necessary pageant of historical wrongs. The estimable cast also includes Alfre Woodard, Michael Kenneth Williams, Garret Dillahunt, Adepero Oduye, and as the most maligned, abused and wronged of slaves, Lupita Nyong’o. 134m. Widescreen. (Ray Pride)