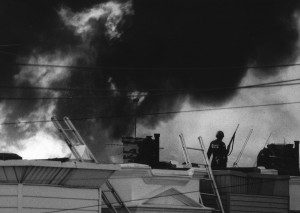 I like the word, I grew up with it, it always had dignity: “documentary.” More recently, distributors and their marketers have looked for a word that’s newer, that holds the wealth of styles the form now can include. Nonfiction? Nonfiction is everywhere: it makes for the cheapest television, but also some of the most worthy personal filmmaking being done. And the truth is: there’s a lot of it.

Most weeks in Chicago, a dozen or more films open theatrically, and in the past couple years, many weeks are more nonfiction than fiction. But, truthfully, very few are memorable. The theatrical marketplace is choked, even throttled with nonfiction entries. There’s stuff for the narrowest of niches. About wine, about red wine, about sommeliers, about terroir. It’s almost to the point where it’s about your city, about your neighborhood, about your block. The economics are there to shoot and edit on a shoestring, but it’s inspiration that doesn’t come cheap. The New York Times has a policy of reviewing every single film that opens in New York City for a weeklong run, and its Friday film section is pages-thick with all manner of seekers of truth. Anthony Kaufman, a veteran industry observer, noted at Sundance Now that a grand total of twenty docs opened in New York in the last two weeks. He notes, with understatement, “Not all documentaries are for everyone.”

That glut, Kaufman writes, “is one of the central factors that helped bring the indie film boom of the 2000s to a crashing halt. There were too many financiers putting too much money into too many films, which in turn were competing for too small of an audience.” But that concern shouldn’t be a reviewer’s job, even with a desk teetering with preview DVDs and email coursing with Vimeo streaming links. Omitting a few openings, you could see these films on larger screens this week: The four-hour “At Berkeley,” the latest fine-grain observational dreadnought from Frederick Wiseman (October 20), and dynamic dirt-bike doc “12 O’Clock Boys” (October 19, 22), Errol Morris’ interrogation of Donald Rumsfeld, “The Unknown Known” (October 22-23), all three at Chicago International Film Festival, plus the sturdy niche uplifter “Cubamerican,” abortion-provider portrait “After Tiller,” abuse-of-power narrative “Let The Fire Burn” and a return engagement of “The Act of Killing”’s inventive portrait of Indonesian genocide gone unpunished for decades.

What on earth do these films have in common? It’s actually really simple. The best are months, if not years in the making. Longitude helps. Not just the empathy it takes to find a subject, but the duration to find the story, the subject matter seeping in, the protagonists wearing down the filmmakers. But also, like the forthcoming “Trials of Muhammad Ali,” they’re movies that are found, rather than designed, with subject matters that grow, transform, bloom. It takes a lot of time.

Time was taken on the tender, melancholy yet emphatic observational doc, Martha Shane and Lana Wilson’s “After Tiller,” which follows the work done by the last four doctors who perform third-trimester abortions in this country, all who knew or worked with murdered doctor George Tiller, who was gunned down in a Kansas church in 2009. You can see its subjects age from scene to scene, and none of them are young. In its quiet way, it’s an advocacy doc to uphold the law of the land: despite a crazy quilt of state regulations, what they do is legal under federal law. The providers discuss the implications of the acts they perform and the reasons several have continued far past retirement age in their calling. (It’s bracing to hear the word “terrorist” correctly applied to acts of intimidation that include murder and firebombing.)  The position of the filmmakers is never in doubt, but in detailing the daily choices, acts and emotions, Shane and Wilson have made an assured, incisive humanistic nonfiction film to esteem.

With “Let The Fire Burn,” filmmaker Jason Osder shot interviews, talking heads and other new material, but in a daring move, he chose to use only the brimming amount of archival footage he discovered while making the film, foregoing narration as well. (There’s no time past like the present tense.) It’s a masterful chronicle, a found-footage thriller, about the 1985 war waged against the militant African American counterculture group MOVE and the aftereffects that followed the Philadelphia police’s firebombing of their headquarters and sixty other homes, killing eleven people. There’s no way its form, which Osder calls “pure historical pastiche,” could have been defined in a month or two.

About “The Act of Killing,” co-director Joshua Oppenheimer told me, “When you have a thousand hours of footage and you have to go down to twenty-three hours of scenes… That took a year-and-a-half with two editors. Then we went from twenty-three hours of scenes to the two-hour-forty-minute full version of the film. Then we went to this version, which is the longest in our contemporary economy, and cinemas can really bear. A hundred-sixteen minutes, it’s about as long as you can get away with. You have to be extremely economical, given that there is such a big political picture to tell, we’re walking this tightrope between repulsion and empathy, and before you can have empathy, you have to see the people are human and feel them as people.”