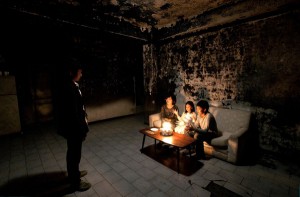 Let there be dark: here are some highlights (and a couple of lowlights) of the second week of the Chicago International Film Festival. In the terrible “Despite the Gods,” Penny Vozniak seems hopeful she’s got a “Lost In La Mancha” film-shoot-shot-to-hell documentary as Jennifer Lynch melts down during the summer 2008 shoot of “Hisss,” a horror-musical about a snake goddess transposed to latter-day India. “We have no business speaking of gods!” she rightly says, gesticulating while a co-worker scarfs lunch from a paper plate. It’s a ragged, painful pileup and Lynch comes off as foolhardy and hapless. Yet, walking away from a screw-up, she gets it right:  “There are too many cooks in the fuckin’ kitchen, done.”

Daily life’s no fun at a film festival, either:  In Yu Liu’s “The Blinding Sunlight,” furnished with non-professional actors, iPhone-level video adds despair to a ragged street-level fiction take on lives in a beatdown Beijing neighborhood, as well as atrocious sound and a dim visual style that suits its unabiding hurt. But Tsai Ming-Liang’s tenth feature, “Stray Dogs,” is hypnotic covering parallel ground, using digital means to depict a father and two young children squatting and hardly subsisting in an abandoned building in Taipei. The father works as a human billboard in slapping rain in thin, disposable ponchos, holding signs up for drivers along an underpass to notice (or not). Tsai’s digital visuals are stark and otherworldly, as in his earlier work, keeping the debilitating story from utter squalor. He works with long takes, lustrous gloom, and obsessive and hypnotic compositions that make Taiwan seem like another planet. One scene is captured in a take as long as the opening shot of “Gravity” of a man eating a huge, head-sized cabbage after practicing a terrible thing to the sound of never-ending rain. His images are both terrible and beautiful.

Playwright-screenwriter-director-actress Agnès Jaoui’s 2000 “The Taste Of Others” earned a common description as a Gallic successor to Woody Allen, but her more recent films haven’t gotten as much notice here. With the playful “Under the Rainbow,” Jaoui and co-writer-partner-curmudgeonly-co-star mash up elements of familiar fairytales in modern-day Paris, tinkering with the notion of princes and princesses, but they’re most adroit at contrasting the particulars of youthful romance with middle-aged misgivings, compromises, and eager hopes. Asli Özge’s “Lifelong” daubs in the particulars of the lives of a modern middle-class Istanbul artist and her architect husband. There’s a hush to their unspoken conflicts, but as she prepares for a gallery show, things grow tense. Özge’s visuals are sumptuous, winter-chill compositions capturing privileged spaces: love falls away, the world remains, offering cold embrace. There’s a whiff of the kind of so-serious contemplation of the films of Turkish master Nuri Bilge Ceylan, to “Lifelong”’s advantage. (Ray Pride)

Films and events are at River East. The full calendar, including notable events, panels and appearances, is at chicagofilmfestival.com