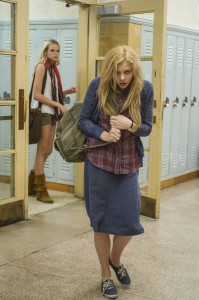 “I been hurt my whole life.” What at first seems superfluous is in fact exquisitely designed, compact and brightly acted: Kimberly Peirce’s retake of Brian DePalma’s 1976 “Carrie” closely follows the contours of the original, as if Stephen King’s first novel was a cultural touchstone, a common folktale. Lawrence D. Cohen, who wrote the 1976 screenplay, shares a credit with Roberto Aguirre-Sacasa, a former Marvel comics writer who has written and produced episodes of “Glee” and “Big Love.” But emphases vary, including extra bits about school bullying: Carrie’s locker-room harassment becomes a cell-phone video uploaded to the Internet. The climactic full-moon tidal wave of violence against her tormentors is substantial if not explicit; while the release was postponed from a March date after the December 2012 Sandy Hook Elementary School murders, there’s little evidence of any substantial softening. Chloë Grace Moretz hasn’t got the milky otherworldliness of Sissy Spacek and, as “Carrie” begins, she seems more kittenish, an incipient beauty rather than someone who would always immediately look like an outsider. As a tremulous child just turned woman, Moretz’s Carrie is wonky yet feline, her large eyes slightly slurred by their cast, which once was called “the look of Venus.” Peirce indicates Carrie’s vulnerability, her tininess, in the school hallway when Tommy, the school dreamboat, first chats her up. He must casually, ever so notably, dip his shoulders, bend his head toward her diminutive stature. Still, Moretz contains, but nearly bursts with such vivid disappointment and rage. It’s a different physical incarnation for her than in “Dark Shadows,” where Tim Burton had her incarnate the slinky, prehensile danger of femaleness that would have struck fear in a fourteen-year-old boy in 1972. Carrie discovers that much has been written about her apparent gifts, and takes to the library with stacks of books: it’s as if she discovered her talent, her vocation, her calling, more than her telekinesis being any sort of curse. (Her first conscious tickle, after her reactions to her first menstruation in the girls’ locker room and her mother’s control, is to cause the flag outside the library window to whip ever so lightly in still air.) The film quietly becomes as much about knowledge and self-knowledge as a fear of or repugnance toward incipient female sexuality. Pallid and drawn, her red hair wrought and wrinkled with gray, Julianne Moore ripples with self-loathing. Another performance of note, as the sympathetic gym teacher, is Judy Greer’s. The vital wit and dignity of her face is matched by her delivery: “a shitty thing” is a splendid thing in her intonation, as is “He’s pretty dreamy.” Stray sounds zing: The tang of the tine of a knife drawn from the washing up sings; the “Final Destination”-level dispatches of the prom scene burble with splat and gush. The camera sexually idealizes Tommy, as it does a simple shot of Carrie in a dress shop, late afternoon light outside playing behind a simple plaid sundress making the dress, her figure, translucent and full. And when Tommy arrives to take her to the prom, the light is also faultless, her peachy pink dress abloom in cresting golden hour. Peirce’s imagery is pungent throughout: the mark of Carrie’s bloody palm print on the eggshell blue of her gym teacher’s skirt; a slow-motion whirling sateen dervish of a student and her gown in flames; the camera angle that depicts Carrie’s movement forward into the Guignol melee as a potent, unstoppable motion, her hips pitched forward, leading forcefully with her pubis. Plus, throughout, there are more bare feet than on a beach in July. With Gabriella Wilde, Portia Doubleday. 99m. (Ray Pride)