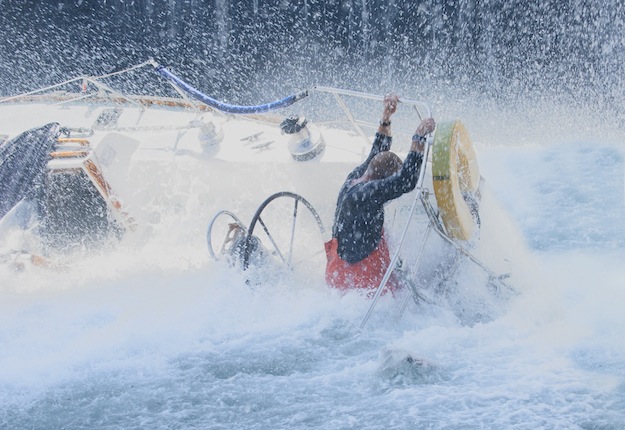 J. C. Chandor’s blissfully visual “All Is Lost” would be a silent movie if not for the incessant sound of the ocean, the hiss and slap of the sea, threatening his aging protagonist, dubbed “Our Man” in the credits, with multiple varieties of sudden, horrifying death by drowning. The hull of his too-small ship out on the Indian Ocean near the Sumatra Straits is rammed and gashed as he sleeps by an errant, semi-sized shipping container. The opening shot, ominous and geometric, only describes water, sky, and horizon line, interrupted by this brick-colored metallic buttress, as mute and unforgiving as the monolith of “2001: A Space Odyssey.” But once Robert Redford is on screen, his muted, exasperated, hopeful performance is an exemplar of the physical. Our Man seems a man of reckless wealth and expansive estrangement: why is he at sea? Begging the larger question, why are we all at sea? A sweet savor of Chandor’s script is that any implications about commerce, any ironies about what holds our world together, or how big fish are drawn to schools of smaller fish, is shown, never described. Pick your metaphors and glory at the violent vagaries of sky, the incandescent pinpricks of stars, and the pitched indifference of the sea. “All Is Lost” shares existential implications and the sense of how abruptly death can be dealt with box-office success “Gravity”: strange how bright and curious talents are drawn to similar themes at the same moments in film culture. In the Fall 2013 issue of Filmmaker, Chandor makes a remarkable confession, even more remarkable in how effective “All Is Lost” is. He modeled his structure after 1980s action thrillers: a few minutes to identify a problem, a few minutes more to define it, and then a few minutes to use intellect and experience and improvisation to solve the problem; repeat. Plus, among the film’s few exclamations, of the protracted “Fuuuuuuuuuuuuuuck!” I can only say a truer word has seldom been spoken on screen this year. The end credits of the modestly budgeted film demonstrate the film business’ affection for Chandor after “Margin Call,” as well as the filmmakers’ affection for one of their locations listing sixteen of their favorite Baja restaurants. (Not to mention James Cameron, for establishing the Baja-set marine studio, Michael Bay, Russell Crowe, producers Megan Ellison and Christine Vachon, and seafarer Peter Weir.) Other sweet tickles in the end scroll include “LOCATIONS GENEROUSLY PROVIDED BY Baja Studios, Playas De Rosarito, Baja California, Mexico, The Pacific Ocean, The Atlantic Ocean.” 107m. (Ray Pride)