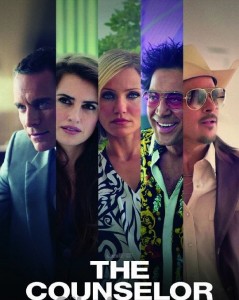 But for a pitched altercation on a CTA bus between two elderly, raucously disagreeable men in wheelchairs—a not uncommon occurrence on the 66 bus, in my daily experience—I would have made it to the early morning screening of Ridley Scott’s filming of Cormac McCarthy’s script, the drug-deal-gone-oh-so-terribly-wrong tale “The Counselor” with minutes to spare. The studio showed the film to reviewers only this once, on Tuesday before a Friday opening, keeping it largely under wraps except for the visual sizzle of a few commercials shown on sports channels. Wonder why! While fate kept me from that screening, Vintage published the paperback ($14.95) a week earlier, and I continued to read it as I realized I would be a half an hour or more late. C’est la vie, c’est la guerre. On the page, this version is, I don’t know, bonkers? What’s a bigger pile-up of descriptors than brazenly bonkers batshit? Extended monologues alternately wound and caress the eye and, by some reports, what’s on screen deletes some of these scalding siroccos of language in favor of other sandy windstorms. Post-it #1: “I have to say that for a girl who liked girls she took an extraordinary interest in the male member. She sucked on it so hard it finally corrected my vision. She left me for this good-looking black woman. Had a boyfriend used to play for the Oilers. Nice chap. We met once for drinks at a club in Dallas to discuss our mutual plight. He was taking it rather poorly, I have to say. Women do better, don’t they?” As an unregenerate fan of spoken-word salad that reveals itself as snakily logical, I got more perturbed. Which actor is this in which accent? What have I missed?! Post-it #2: “I never knew my parents. They were thrown out of a helicopter into the Atlantic Ocean when I was three. Look, you dont have to do the forgiveness thing. All you would have to do is listen. To the sins. You could even pretend I was lying. If you didnt like what you were hearing.” At eighty, McCarthy has not only forever abandoned the apostrophe. Post-it #3: “No one wants to admit that the object of his desire has weighed him in the balance and found him wanting. That is a very hard thing to accept. Better to imagine the desired one as whimsical and irresolute. Would you agree?” What do you say to dialogue like that? Me, this coming Friday: “One, please!”

“The Counselor” opens Friday, October 25. The paperback edition of the screenplay is now available.