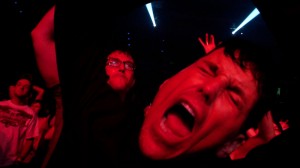 Doug Hamilton’s clear-cut “Broadway Idiot” errs on the side of holding back on uninterrupted performance footage, likely to enable an eventual filming of Billie Joe Armstrong’s successful Broadway adaption of Green Day’s “American Idiot” album. Hamilton also skimps on deep thought, letting figures say things instead of the film showing them: “Billie Joe, just like all of us, has his dark side,” a key collaborator coos, “the side that’s self-destructive, manipulative, charismatic but dangerous to himself and others!” Odd devices are scattered throughout, as in completely fake newspaper clippings from the show’s positive reviews and slowing down non-interview footage. Still, the process of transformation from album to musical is neatly if shallowly sketched and the music’s energy could wake up those who expected more. 80m. (Ray Pride)