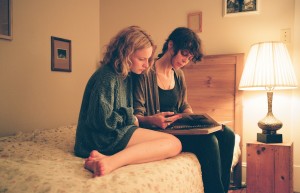 Matthew Porterfield extends his grasp of the everyday and the extraordinary in the masterful, elusively beautiful “I Used To Be Darker.” Like his first two scruffy, lovely features, “Putty Hill” (2010) and “Hamilton” (2006), Porterfield filters a story of divorce and family estrangement and teenage runaways into something akin to memory. There’s a narrative scaffolding, but it melts away in the elemental quotidian, the precise locations, unpredictable behaviors and the sounds of music and swears: as the runaway’s brother tells her via Skype, “Obviously, you didn’t go to fookin’ Wales.” Nineteen-year-old Taryn (Deragh Campbell) runs away from Northern Island, seeking the embrace of her aunt and uncle (musicians Kim Taylor and Ned Oldham), but finding that their marriage is at an end. (“You got us at a bad time, Taryn.”) Still, the couple’s daughter Abby (Hannah Gross) is a ready emotional bookend for Taryn. Porterfield observes his characters move about, gently, as if unthinkable emotional horrors lay in a single fouled footfall. It’s drama on tiptoes, and the rushes of emotion are unexpected and come often. The acuity of Porterfield’s understated and lyrical scrutiny of chance moments in familiar circumstances is intense. Co-screenwriter Amy Belk says she and Porterfield listened to Bill Callahan a lot while writing, and drew the title from lines in the song, “Jim Cain”: “I started out in search of ordinary things… I used to be darker, then I got lighter, then I got dark again / Something too big to be seen was passing over and over me.” Notably, each and every music cue in “Darker” comes from an onscreen source: sometimes the most practical notion is the most fruitfully aleatory. Jeremy Saulnier’s summer-spent cinematography is gentle and nothing shy of exquisite. With Deragh Campbell, Hannah Gross, Ned Oldham, Kim Taylor. 90m. Widescreen. (Ray Pride)

“I Used To Be Darker” opens Friday, November 1 at Facets. The lovely U. S. trailer is below.