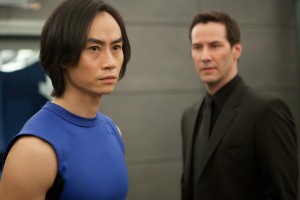 A man discovers his capacity for violence and the difference between “soft” and “hard.” Keanu Reeves’ directorial debut, “Man Of Tai Chi,” a martial arts mini-“Matrix,” is fizzy, physical fun. As director and as antagonist, Reeves’ work is coolly measured and knowing. Set in Hong Kong and Beijing, and spoken in English, Mandarin and Cantonese, “Man” is hybrid but not mongrel, taking dashes from American editing with mainstays of lighter Hong Kong police procedurals and, of course, boasting the action direction of the great, ubiquitous Yuen Woo-ping, whose work since 1971 includes the “Matrix” trilogy, “Crouching Tiger, Hidden Dragon,” the “Kill Bill” films, and so much more. Super-wealthy businessman Donaka Mark (Reeves) runs something called the “Security System Alliance” in Hong Kong, but his passion is underground fights, taking place in private but broadcast to cognoscenti around the world. (The whiff of apocryphal “snuff” films doesn’t linger.) Reeves reduces his acting style to brusque alacrity (at least until his own kick-heavy mano-a-mano). “Innocent,” he rounds the word as he first lays eyes on the young contender. “This is how it works,” he says, not robotic, but certainly clipped and terse. Even his delivery is gruff: “Tai—Chi—that’s different.” As the last practitioner of a 600-year-old form of Tai Chi, Tiger Chen has a similar forelock-shaped shoulder-length haircut as 1980s Reeves, as well as the dark, give-nothing eyes. A simple Beijing messenger, he also wants to surpass his master while saving his temple. Pro forma, sure, but briskly paced. For the most part, the fight scenes are grounded in physical potential, but there are shots and edits that have simple physical magic to them. 105m. Widescreen. (Ray Pride)