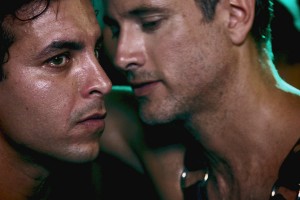 Even without previewing most of the titles, the schedule of the thirty-first edition of Reeling looks like a perky, provocative package, its seven days filled with gay, lesbian and transgender films with edge and humor, including the Midwest premiere of “Black Box,” Chicago filmmaker Stephen Cone’s follow-up to “Wise Kids,” a range of documentaries, including Jeffrey Schwarz’s “I Am Divine,” and “Interior. Leather Bar.,” Travis Mathews and James Franco’s multi-meta imagining of a re-creation of as well as the apocryphal “lost footage” from William Friedkin’s “Cruising.” (The “contemporary” footage being rehearsed by Franco plays largely like a student-film conceit; the sexually explicit, music-driven montages as an extension of what Mathews has already accomplished with editing in his personal, sexually explicit work.)

After taking 2012 off to regroup, this year’s festival, Chicago Filmmakers executive director Brenda Webb told me recently that the eight days of programming, centralized at the Logan Theatre will be “tighter, with higher-profile films in a wider range of slots than before.” Reeling will use two 170-seat screens. “At the Landmark, Century we were in a 260-seat theater and a 100-seat theater, so we were able to program shows against each other that would appeal to very different audiences and we could take risks in the smaller theater because we didn’t need to attract a large audience. The programming is probably more evenly weighted for each screen and, therefore, the audience is going to have to make some very difficult choices.

“But one of our greatest strengths this year will be our location in Logan Square,” she says, encompassing another form of community. “We have a very good feeling about being there. I feel the festival will be more integrated into the fabric of a community than ever before, which is exciting. The community response to Reeling coming to the Logan has been amazingly welcoming, with support and enthusiasm coming from the alderman to gallery owners, to community activists, to business owners. We’ve been approached by several restaurants and bars asking to host after-parties and the outpouring of offers of support has been unprecedented. A community activist has actually assembled a Logan Square Host Committee to insure that the festival is welcomed in the community and that the community is connected to the festival. We think being in Logan Square may end up impacting our audience demographics, as well, anticipating that we will attract younger audiences than usual and there will be more straight crossover than ever before because this seems to be a very strong progressive and community-minded group of people.”

So is there a Reeling “tradition” to speak of? “In terms of our long tradition, one of our strengths, in my mind, is our regulars. These are people who have been coming to the festival for years, some who take their vacations during Reeling so they can see as many films as humanly possible. These are the core fans of the festival that really give meaning to what we do: this festival has a place in their lives and they look forward to it every year. These are the people I was most concerned about when we took the year hiatus. I’m looking forward to seeing our regulars again!”

What’s different after taking 2012 off? “Much of the decision about taking a year off was really about allowing me to focus more on my job as Chicago Filmmakers’ executive director and to get more help running Reeling, I would say the major changes from the year off are less about how Reeling has changed and more about how Chicago Filmmakers itself has evolved. The year off gave us time to focus on our organizational capacity. We built up and developed our board of directors, established a Reeling committee of the board, and were able to take time to do organizational infrastructure tasks that too often got back-burnered before, such as rewriting our bylaws.” Webb also cites fresh energy and artistic direction this session from new festival programming director, veteran journalist and activist Richard Knight, Jr. “The thing I thought would be the hardest for me to let go of, as far as Reeling is concerned, was the programming. It turns out it was the best decision ever! Personally, I had the first real summer in thirty years because typically I spend my summer evenings and weekends looking at about 800 films. Having a programmer take that over has been great.”

“Reeling” unspools at the Logan Theatre, November 7-14. Details at reelingfilmfestival.org