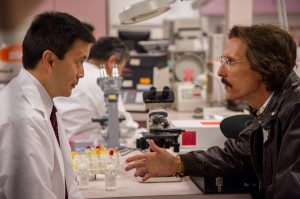 In “Dallas Buyers Club,” Matthew McConaughey and Jared Leto worry through stellar, starry performances in the surprisingly rough-edged and foul-mouthed portrait of Ron Woodroof, a 1980s Texas skirt-chaser who turns his life around after a diagnosis of HIV and a life expectancy of thirty days, to obtain life-saving drugs for himself out of self-interest, but soon, in a feat of innovation and entrepreneurship, for dozens of others in defiance of government sanctions. Woodroof’s a crass, homophobic, drug-and-liquor-loving flaming heterosexual. As his partner in federal crime, fellow AIDS patient, the (fictional) Rayon, Leto hits every mark, low humor, compulsive highs and emotional crests, with impressive verve. Director Jean-Marc Vallée’s mix of tones ranges from the demure quality of his “The Young Victoria” (2009) to the more off-kilter and crunchy character of his 2005 “C.R.A.Z.Y.,” a music-mad, visually impulsive look at a 1960s Québécois family. Craig Borten and Melisa Wallack’s script thrives on the imperfections of Woodroof and his friends—“Shit, I know you got a pussy addiction, motherfucker” is how one co-worker reacts to the mention of AIDS—and it’s a bracing relief from movies that sandpaper their characters and their motives into dust. “Nothin’ out there that can kill fuckin’ Ron Woodroof in thirty days!” is only the start for the increasingly gaunt McConaughey’s investment in the garrulous Texan: “Screw the FDA! I’m gonna be DOA!” Rayon’s Ron’s equal: “I guess you’re handsome in a dumb Texas hick kind of way,” and “If it sucks? I got it.” Music choices are sometimes lyrically spot-on, but usually feel right, especially a modest fixation on T. Rex. With Jennifer Garner as a contemplative physician and Griffin Dunne as an alternative medicine doctor who’s gone very, very Mexico. 117m. (Ray Pride)