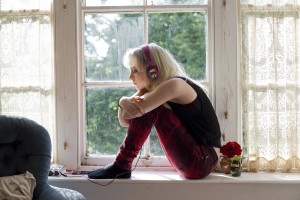 Lush and bewilderingly rich with portent and moment, Kevin Macdonald’s gently wrought apocalyptic-pop teen romance “How I Live Now,” adapted from a 2004 young-adult novel of the same name, takes place in a deadly near future, in the English countryside far from the center of modern war. Even in catastrophe, kids will be kids: American teenager Daisy—the marvelous, perhaps peerless Saoirse Ronan—is on her way to visit her British cousins in an airport flecked with futuristic elements, and intimations of “terrorism” across the European continent. Daisy’s anxiety seems simply teenaged, but the circumstances can’t help: it’s a while before the movie slows its tempo from her headphones-infused jangle and sounding of her contradictory thoughts in a tinnitus of raised inner voices. Her cousins who pile through their English mannered house know a boy, wouldn’t you know, about her own age, handsome Eddie (George MacKay), a falconer in a nearby wood. Despite all the rural charms, Daisy remains reticent, refusing a swim, “I don’t swim,” a hike, a flirt. She’s Bartleby the visitor: she prefers not to. But, after the fashion of “A Canterbury Tale,” the masterful film by Michael Powell and Macdonald’s grandfather, Emeric Pressburger, made almost seven decades ago in 1944, the film settles into a similarly tender appreciation for the timeless, lasting, to-be-preserved rustic qualities of rural England and Wales. Ordinary life, that’s what’s endangered by catastrophe, not politics or privilege, the film demonstrates with quiet assurance. We get only glimpses of damage, glimmers of ruin, including marshmallows around the fire being disturbed by sounds from distant, distant, so distant London, followed quickly by pillowy ash piling from the sky and whitening the setting’s verdant embrace. While Ronan’s American accent as Daisy is impeccable, she’s surrounded by all manner of voices, increasingly raised and eventually hostile, as nuclear war breaks out, far, far away, and the countryside is occupied by the military. She wants to blame herself for everything: “I’m a fucking curse! Everywhere I go, bad shit happens!” Still, in the loving way of “How I Live Now,” her narcissism falls away, strength comes, hope, yes, there’s hope. As long as hands can touch, there is hope. With lots of music by Elgar, as well as the moony English romanticism of Nick Drake and Fairport Convention. The cinematography by Franz Lustig, whose feature work has mainly been for Wim Wenders, is heightened and lovely, whether at pitched moments or more impressively, the gently bucolic ones. With Harley Bird, Anna Chancellor. 101m. (Ray Pride)

“How I Live Now” opens Friday, November 8 at Landmark Century.