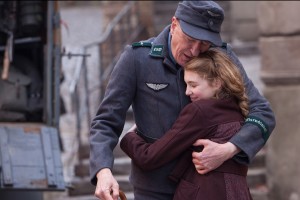 Tempting kitsch, the adaptation of the 8,000,000-copy international bestseller “The Book Thief” suggests not only that kindness, but joy, can exist in terrible times. The tone of the movie is a storybook telling of World War II in a small German village from the perspective of Liesel, a pre-teen girl taken in by foster parents Hans and Rosa (Geoffrey Rush; Emily Watson). Rosa is stern and Hans is kindly, and despite multiple complications that reflect the bad things outside their village, Liesel absorbs, reads, reflects, writes, learns, blooms, lives.

Director Brian Percival, who directed six episodes of “Downton Abbey,” and cinematographer Florian Ballhaus keep to the notion of everyday life retaining its cadence and refrain from the usual monochrome or diminished palette of such storytelling. As little Liesel, Sophie Nélisse is also a kind of storybook feature: a large-eyed girl almost too beautiful for any world, especially when kindly adults are keeping cruelty at bay.  So how do you make a joyful film about terrible times? I asked Rush and Percival the morning after the film’s Chicago International Film Festival debut.

“Human spirit, I think,” Percival said quickly. “That’s the thing, the one message I got when I first read the script. There are all these terrible things which break your heart in this really dreadful time in history, all that was going on in 1930s Germany. And yet, there’s this story of humanity, this human spirit shining through that manages to overcome all that. I read the script, and it was tearing my heart out, but coming away from it, I felt uplifted by it in some sort of way. I wasn’t quite sure how at the time—“

“It’s the nature of the book, too,” Rush breaks in. “You think, a 580-page story, you’re going into one of the dark periods of human history, that period from ’33 to ’45 in Germany was not pretty. But you get the uplift, because you do get engaged empathetically with the characters on a higher level. If that happens, halfway through shooting, I said to Brian, it will work. You know, you get a feeling when you’re working on it. People are going to die. When we’re shooting the last scenes of this film there’s a lot of death. There is a strange, perverse whimsy about [the fact that a plummy Death is an intermittent narrator], but I said, I don’t want any of these characters to die, because I got so engaged with them and how rich their inner lives were, battling this ideological suppression. That’s where I think the joy comes, that these stories last—I said this to Sophie, she turned thirteen during the shooting—but the thing that really hit me, if she lives to be as old as Liesel does in the film, she’ll be alive in 2090. Wrap your head around that.

“When I was in my twenties in London, going to the Electric Cinema,” Rush continues,” on Portobello Road, the oldest cinema in London, I would go and see like ‘Citizen Kane’ and ‘Magnificent Ambersons’ on a double bill. To me, a film made in 1941, it’s before my time, but you look at it, and go, that was really good for its time! But now people are doing that with ‘The Godfather.’ Young people look at it and say, this old movie, it’s actually kind of good!”

When Hans greets Liesel on her arrival, she’s skittish, but he immediately calls her “Your Highness,” extending a hand into the back of the car. The immediate engagement between Rush and Nélisse is electric. “Yes, I think it’s just that first connection,” Percival says of the incredible smiles they exchange. “All she’s ever known is traveling around, being chased from place to place and this poor frightened child, she feels liked for the first time, this warmth, this little touch of humanity. From that connection, everything begins.”

“That’s kind of in the big print,” Rush offers. “In the novel Hans and Rosa have a grown-up son, and he’s estranged from Hans, certainly. They had terrible fights and rows. But we didn’t have that subplot in the screenplay. So we made conscious use of a Grimms’ fairytale sort of style. I said, look, let’s accept that we are a childless couple, and I think that that will add another little extra bit of storytelling, where we decide to take on foster kids, not just for the cash, because [such couples] did get a stipend.”

The basement of the family’s house is also a fairytale cave, an ongoing vocabulary lesson chalked onto the walls where they later shelter a young Jewish man. “That’s when Liesel has arrived,” Rush says of her possession of the space. “The opening chords of the symphony are the death of a 6-year-old boy. I mean, that happens before the film is even thirty seconds old! You see a child die. And you go, this is breaking my heart already. Everything after that? You can’t pussyfoot around. There have to be little moments, what’s going to get her through her grief? Ah! There’s a friendly woodcutter, is how I thought she would probably see him. Even the finest glimmer of connection from him would be soothing for her in some way. Grimms’ fairytales were a fine analogy for that starting point.”