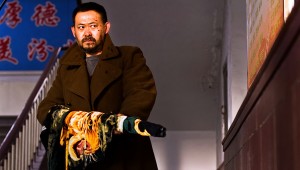 Four characters in four Chinese provinces propel “A Touch Of Sin,” based on three true-life murders and one suicide incited by endemic corruption and violence. (Characters overlap, but the stories don’t.) As richly shot by Yu Lik Wai, Zia Zhangke’s seventh fiction feature holds cold, stern, even ruthless beauty in its capture of magnificent and monstrous chaos. All is artfully arrayed, through scale, symmetry and adroit, thrilling camera movements. The opening story is a bloody, concussive, post-Western, and his dissatisfied protagonist shouts down all that is wrong. It’s as if “Yojimbo” met “Manufactured Landscapes”: the village streets are ruins of never-realized modernity and he’s Yojimbo, the lone man, the lone warrior, with his weapon, his final destination unknown, his present destination, vengeance. He is sarcastic and he is angry and he has a weapon. (His shotgun is wrapped in a towel that can barely contain a roaring tiger.)  There’s a precise, poetic visual detail in every scene throughout: in a cold workroom, twenty men hold their bowls of noodles up to slurp from, steam rising in columns; an overturned truck of fruit in landscape; huge, half-finished, sky-high overpasses; snakes writhe on the floor of a sauna; police cars race one way, a horse with his cart, no rider, goes the other. There are pressures in modern China: put simply and stridently, a man in a sauna shift demands sex from the attendant: “I’ll smother you in money… I have fucking money! Fuck! Fuck you! Isn’t my money good enough?” I can’t imagine a comparable American movie, militating passionately, lyrically over on the economic inequities of American life. It just isn’t done. 132m. 2.35 Widescreen. (Ray Pride)

“A Touch Of Sin” opens Friday, November 22 at the Music Box.