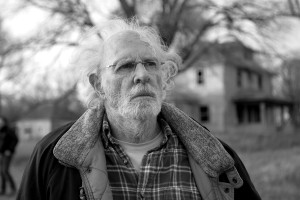 “Nebraska” opens with an old-fashioned Paramount Pictures logo, in widescreen black-and-white, like the film, and it’s a logo that prefaced a few classic movies in its decades of good use, including Billy Wilder’s “Sunset Boulevard” and Preston Sturges’ “The Lady Eve” and “The Miracle of Morgan’s Creek.”

Director Alexander Payne shares a bit of the worldview of both Wilder and Sturges, but even directing from an original screenplay written by Bob Nelson, a veteran of sketch comedy, his own mingling of scorn and love for his characters is something all his own. Who else captures the indignity of common people’s meanness and cheapness with such intensity? For the first hour of “Nebraska,” it seems like the meanest movie Payne has ever made, but largely, but not entirely, through the expansive performance of seventy-seven-year-old Bruce Dern, the second hour flowers into rare beauty. Payne’s perspective becomes the tender regard of a squinting skeptic. Commonplace indignities, quotidian resentments, banal snipes: welcome to the tangled garden of Alexander Payne.

Along a nondescript highway among nondescript highways, a bent-forward man, his face crowned with a nimbus of flyaway white hair, and white beard in every patch where it will grow, marches purposely forward, toward senility to be sure, but more immediately, Nebraska. Lifelong drunk Woodrow T. Grant is once more making a run from Billings, Montana toward Lincoln, Nebraska, where he’s convinced a million dollars awaits him from a mail-order sweepstakes company like Publishers Clearing House. It’s his last dream. At home, he’s silent, resentful, a grizzled remnant, a resentful husk. “Don’t know,” “Doesn’t matter” and “Beer ain’t drinkin’” are about the most you’ll draw out of Woody.

As his never-suffering wife, June Squibb (who is eighty-four), plays the older woman who has never aged inside: she’s still a brash little girl, given through verbal disinhibition to bragging on her youthful sexual sallies. She’s also an oppressive harridan, one of the great portraits in memory of a lively, horrible old lady. Squibb is Midwestern (or even mid-Southern) through-and-through, but she’s in a lineage of a history of fictional Greek mothers who will not let you suffocate her child; that’s her duty. Payne allows her the film’s most precise comic moments: he’s in love with how she plays her character’s lifelong knack for belittling cruelty. She’s the buttermilk of human unkindness.

Exasperated after repeatedly chasing after his father as he marches off, younger son David (Will Forte) hatches the idea of driving his truckless father the 750 miles to Lincoln. Maybe they’ll even…bond? The Grants are two generations, maybe more, of taciturn no-hopers. Forte readily shoulders on the mantel of a sad sack, with dead eyes and downturned mouth, his voice a hardly inflected wheedle. Dad is but one small part of a life’s unpleasantness. The desiccated black-and-white of Phedon Papamichael’s cinematography of the Midwestern landscape offers no beauty or respite to the pair. Once father and son are on the road, they travel several states and we never hear a thing they say: it’s just a montage. The sky extends forever across the flat land, never suggesting expanse, but lowering, confinement, pushing small, human figures to the ground.

But watching “Nebraska,” we see a landscape as windswept and unkempt as the Missouri of “Winter’s Bone”; the high skies of Westerns where lonesome men rode: the plain interiors that swallow up old people in Ozu. (Trains crossing landscape, unremarked: another affinity with Ozu.) As their seriocomic adventures continue, another cultural parallel arises: this is the third-generation Greek-American filmmaker’s most Greek film ever. The native Omahan’s features show respect for multiple generations merely by paying attention to them, as well as how they refract one another. The ceaseless verbal belittling is very Greek, indeed. And the old man and the middle-aged man returning to the village each with their own idea of what “the past” means is a story that Greece’s best-known filmmaker, the late, great Theo Angelopoulos returned to more than once, in movies like “Voyage to Cythera.” Angelopoulos used that journey, both physical and psychic, to capture the return to the homeland that is innocence, to which, of course, there is no return. For Payne and Angelopoulos alike, there are legends and landscapes and a succession of ruins. Payne wears his influences lightly: even a visit to a cemetery by mother, father and son, a few stones set up against the shriveled prairie, deftly matches the framing of a John Ford funeral and moves along. He subsumes eons of influence: “Nebraska” is itchingly true to Payne’s own world.

When the befuddled Woody is sidetracked to his (fictional) hometown of Hawthorne, Nebraska, the village still stands, as well as plenty of people from his past. Brothers and cousins sit together, a television-stunned sextet. Woody’s stories take on dimension when those who stayed back contradict them (including a hard Stacy Keach). The ghosts are both walking and inside himself. Woody watches with increasing alarm, almost like Tom Sawyer at his own funeral.

Finally, father and son talk, when Woody escapes family to one of the local dive bars, the Sodbuster Bar & Grill. “C’mon, have a beer with your old man,” Woody guilts David. “Be somebody.” And so they talk. But Woody doesn’t want to listen: “It ain’t your job to tell me what to do, you little cocksucker.” The old Bruce Dern—didn’t he try to blow up the Super Bowl once?—and the old Woody seethe up in masterful fury. But calm returns. The old homestead? “Barn’s still standing,” but “It’s just a bunch of old wood and some weeds.” Then a ray of light: in a last contrivance in a script ripe with them, Payne finds a way through, sets up a small, Fellini-like final procession through Hawthorne and sends Woody on to his due. Payne offers Woody grace. In a moment of illusion, all is right, and “Nebraska” becomes beautiful.